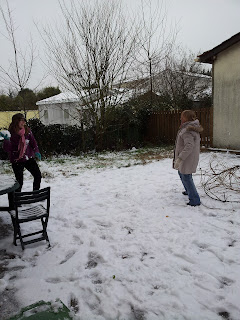 Well they forecast snow. "Yeah, yeah", I thought. But when I got up, there was snow.

Hmm. Snow and ice are so rare here that the roads don't get gritted. After all, why spend all that money on buying big wagons and storing loads of grit and maintaining the wagons in good order just to use them perhaps once every five years or so ? Isn't it better to give everyone a snow day ?

Thus it was that I phoned our person in Anglade and together we agreed that the service there should be cancelled. I then phoned Patrick, who was due to preach at Cenon, and we cancelled there too. SMS messages to everyone. Then we wondered for the English Service in the evening.

We hunted for a video message on youtube. We decided on R C Sproul http://www.youtube.com/watch?v=9TgUgAu93Bs Afterwards a bit of fun in the snow with the neighbours. 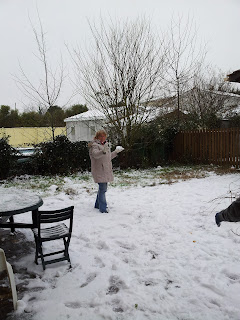 By 13h people were needing to know about the evening. There were still no buses or trams anywhere in the city, and almost everyone comes by tram. So we cancelled. We invited one person who has a car to come round but wisely they said the roads were too dangerous. 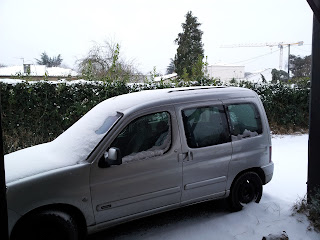 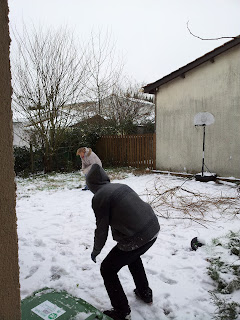 That was yesterday. This is today, and the trams and buses are running again. Gwilym has a day off - he starts his work experience in the music shop in the middle of town tomorrow. Catrin has a visit to the Jean Moulin museum this morning. It's my day off but I think I'll get on with some preparation for later in the week anyway. Two snow days in a row would drive me nuts.
Posted by Alan at 8:22 am