2) Litt Act decided that this morning was a good time to over-run by 10 minutes.

So I charged to the loo (get your priorities right!) then to the office, where the previous exam was still under way. Yes, they were running 1/2 hour behind schedule. So all was OK.

I had to read a text about the danger of poisonous mushrooms. When I say Champignons starting high and ending low my nasal vowels sound OK, so I had to plan every sentence with champignon in it to maje sure I could start the word high. I did the posh liaisons, because I am that sort of guy.

Then I had to transcribe 6 sounds into International Phonetic Alphabet. Well I was RUBBISH at this. In fact, everyone today was, because we haven't done IPA this semester! So we told everyone who has their exam tomorrow or later to revise their IPA quickly! (This happened last time - I was one of the first to sit the exam then told everyone else what to revise...)

Then I had to describe a closed syllable and find one in the text.

Then I had to describe how one does a liaison with a word ending rs or rt and give an example. e.g. on part à quatre heures - you liaise with the r.

Then I had to listen to a tape of what sounded like a dying man describing his life as a poet. He was coughing all the time, sounded on the verge of death and in addition had a very low voice. After listening to it twice I then had to recount everything I heard to the phonetics teacher, then have a discussion about him, poetry and the arts in general. Nightmare.

Then it was all over.

A good resource for them as is learning French

and a useful revision help for today. The thing is, with these things, you have to reach the point where your ear tells you what to do. Until then, it's a case of staring at the rules and trying to rehearse the sentences that really matter...

except that she doesn't mention the way that e caduc sometimes pops up where it never was "le cantique deux cent-er vingt-er trois" or the Rule of the Three Consonants, one of Sherlock Holmes' most perplexing cases...
Posted by Alan at 6:14 am 2 comments:

Well, the creative writing workshop is over.

I had worked with an American, Dustin, but he was not there for the last two sessions, so it fell to me to read sections of our production and to sing the songs we had included.

For Dustin and I had not taken the subject entirely seriously. It was "Je vous écris d'un pays lointain" (I am writing to you from a far country) and our text developed into the account of a hapless dragon chaser, the "George", and the futile efforts he engaged in to protect his town from the ravages of a dragon - then his funeral - and then the way the next George was chosen. At his funeral a song was sung, and again at the selection of his successor.

Although there were moments of exmichaelation in the text (e.g. the George's body was fed to the dragon, stuffed with foie gras, garnished with parsley and surrounded with fruits de mer), the lecturer for the creative writing workshop, herself a published and award winning author and poet, said it was formidable and she loved l'humour anglais.

Other people wrote love stories or stuff about sick dogs.

(exmichaelation - the taking of the mickey)
Posted by Alan at 2:54 pm 3 comments:

The tax lady phoned today. I do have to fill in a French tax return this year. OK. So far so good.

However the complication is that I also have to declare my UK salary from 1 January 2005 to 31 August 2005, and the tax I paid on it. This is so they can take that into account in working out my French tax etc.

Of course, I have not yet filled in my British tax form for April 2005 to April 2006. The form is not due till next January. Good this, isn't it!

Thankfully I have payslips to cover January to July, and August I will calculate. The reason for the complication is that the French tax year runs Jan - Dec.

The good news - I have been wondering whether I will get hay fever here. Every year I wonder if I will "grow out" of my hay fever and every year I have to start taking the pills. Well, I just looked in my diary to see when I started on anti-histamines last year, and it was 14 May. So I have had an extra fortnight without pills. I have some symptoms; a bit of itchiness in the eyes, early morning sneezing, but nothing needing pills yet. Perhaps my allergen isn't very common down here.
Posted by Alan at 2:44 pm No comments:

Pray that the good news will get through

I don't think open-source takes as much time as you think. Installing SuseLinux on my desktop took just over an hour. How much time does it take to install Windows ? Everything worked fine from a start, screen, keyboard...except the webcam. But that is not really a problem. I had to install a fewpackages to read DVDs, and to be able to see streaming videos (VLC andMplayer). Had to install java as well.

What took the longest was updating, but really, you just have to leave the computer work on its own for a bit.

It was very easy, it was all done in a couple of hours.

Emmanuel
Posted by Alan at 5:45 pm No comments:

Just look at all these free resources! MP3 files and pdf notes to download.

They're all at it!

http://www.gwilyminfrance.blogspot.com/
Posted by Alan at 9:57 pm No comments:

I'm sorry! I can't talk about grammar on a Sunday!

Some good friends keep an eye on the PowerPoint slides for speling errers and for grammar erring. It's pretty easy to misspell something or to make a grammatical error in French, which is why dictation is a national sport.

Anyway, this morning a hawk-eyed brother came happily skipping over. I have one, I have one! Wonderful, quoth I. (I can be pretty detached about it because most of the songs are already on disk, and yes, they do have spelling errors!)

Anyway, this was the phrase:

Now the chap's concern was that la lumière qui nous éclaires shouldn't have an s. Elle éclaire. Me, he and she end in e.

Aha, said I, but it is toi qui nous éclaires, and in French it conjugates with toi, not with qui...

This called for a higher authority. Well there is a French teacher in the congregation, so we appealed to her. She came. She observed. She considered. She deliberated. She delivered her verdict.

In the end we looked at the file and decided that essentially it is not a song to the light or the truth, but to the Lord, hence toi.

This lady has a very keen eye and feels strongly for the language, so I bound her with solemn promises to come and tell me of any errers she sees.

Après tout, quoth I, même si je ne change rien, j'apprends beaucoup (one puts in the ne when speaking to her)

Sinclair Ferguson writes about Timothy in a little Banner of Truth book, the title of which I have forgotten, about the importance of knowing yourself and accepting your character and personality and working with it.

The venerable Field refers to an article which may help some to manage themselves, and explains why some of us have to take on more than we can ever really do.

The children celebrate their mother 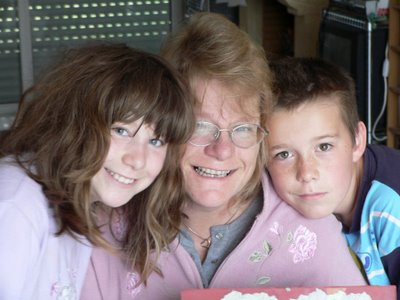 On the way to church this morning we passed some chaps putting up a stage. We came home a different way but over lunch we heard some kind of event going on. It was the finish of the cycle race just up the road by the Fiat garage. So we wandered up to have a look and got there 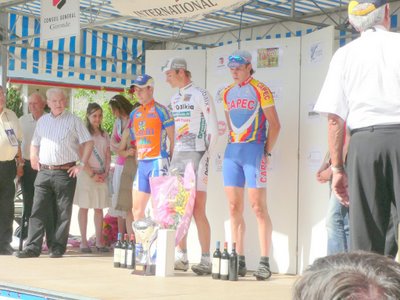 in time for the prize-giving. Here are the first, second and third.

Incidentally, tour is one of those lovely words that changes meaning with its gender. Le tour - the circuit etc, la tour, the tower.

being awarded his jersey, bouquet and Bordeaux by our neighbour 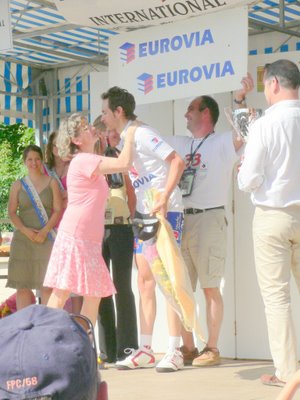 was awarded a jersey of some colour or other, a bouquet and this box of 12 bottles of Bordeaux. "All for me?" There were also prizes for the most promising newcomer and for the most convivial competitor. 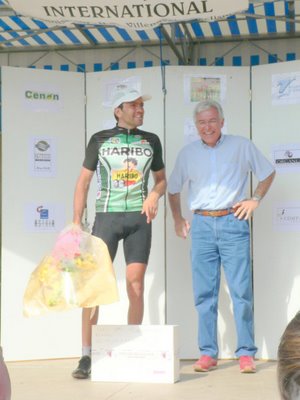 this is a terrible photo, taken indoors with my phone, but today is la fête des mères 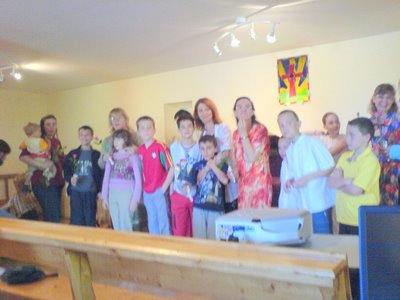 (Mothering Sunday), important here. Pat received gifts made in school, at the troupe de scoutes and at church.

so we went to join today. It's really posh! 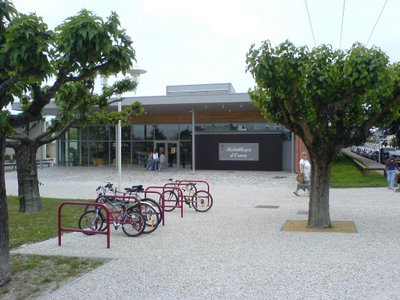 The back of the médiathèque 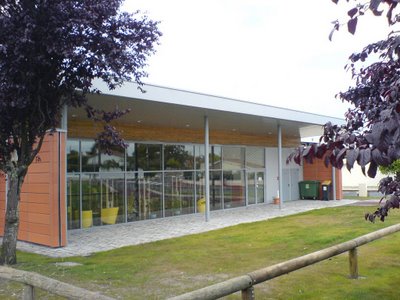 The médiathèque is next door to the church of 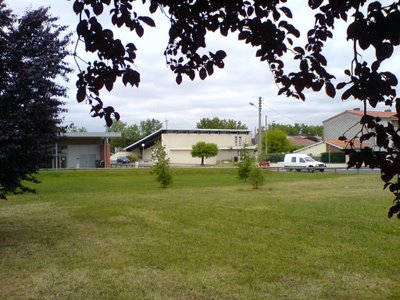 They give you a bag for your books

with the Médiathèque logo on the side. In Bordeaux parlance, a poche. 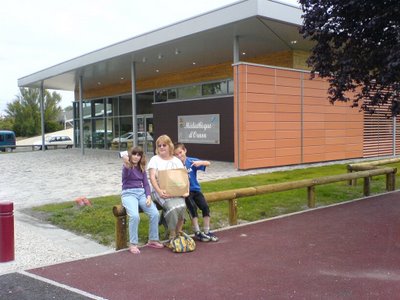 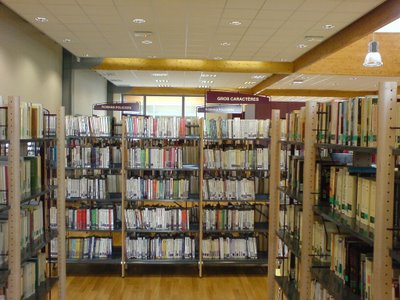 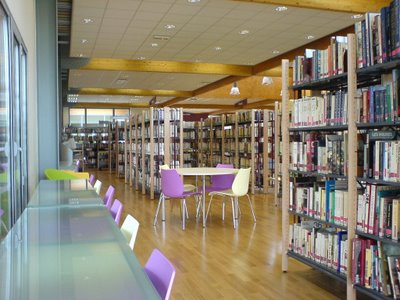 The approach to our house 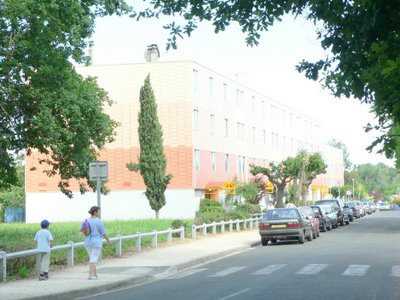 Nearly at the house now.

This is a style of house we always find interesting. It has one room upstairs. Quite common here. 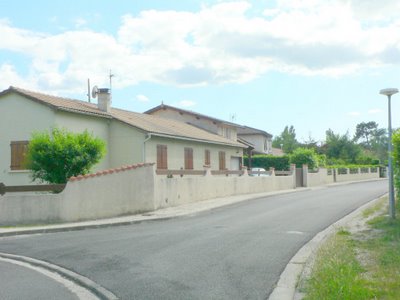 Aha. That's the Daveys' car I can see. 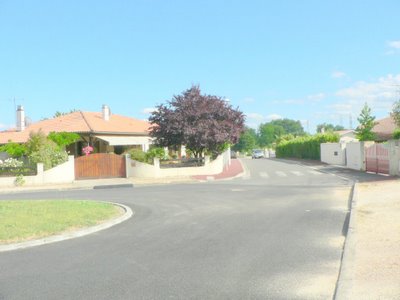 Our neighbours have one of these in their garden 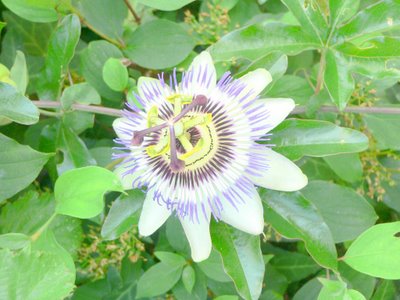 Our house from the other side

We have these awful conifers. If the house were ours, or if we were staying a long time, we'd rip 'em out now and put in something nice. 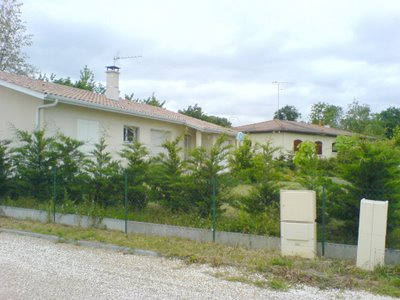 It is very unlikely that most of you will ever be able to call in and see us, and we are hoping to move from this house to somewhere with a mortgage which will be (much!) cheaper. So I thought that it would be good to put up some pictures for you to have a virtual visit. This is the front of the house. It's a pretty normal French suburban pavillon. You see houses like this everywhere. Our street is a bit posh, so most of the houses are bigger than ours, but our has 3 bedrooms, so we are very happy that the kids don't have to share a room. 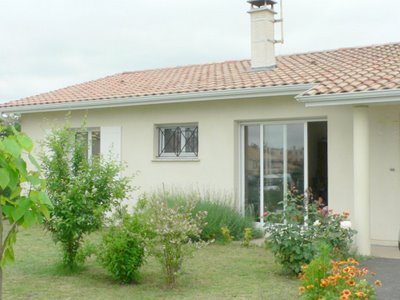 You might see the washing line as you walk up the path. 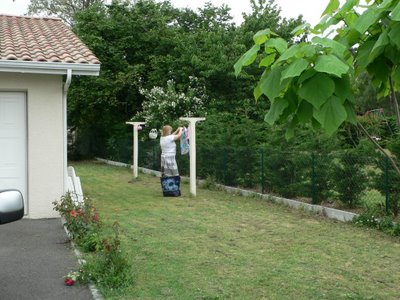 Rodent towers on the extreme left.

The back of the house. The pile of chairs and the white table are not ours. We are looking after them for someone else. 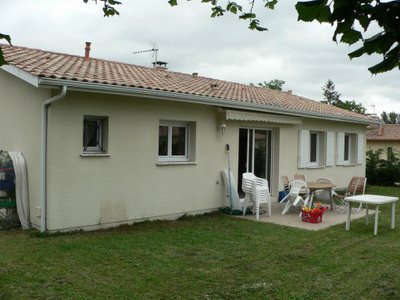 The living room is L shaped and has an end for sitting, and end for eating and an end for cooking in. It is pretty normal for modern French houses 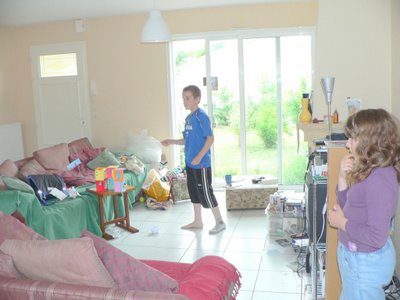 not to have a separate kitchen. We like it because it means we do a lot together as a family, and it all centres round the dining table.

The kitchen with our devoted kitchen staff

Although you'll find our home a mess
come in, sit down, converse.
It's not always as bad as this -
it's usually worse. 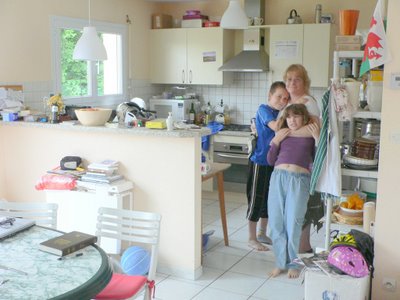 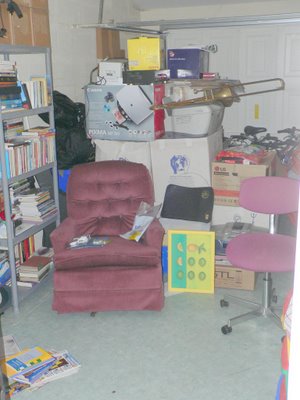 OK it's the garage.

We have a utility room 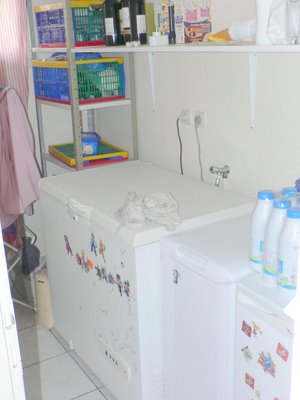 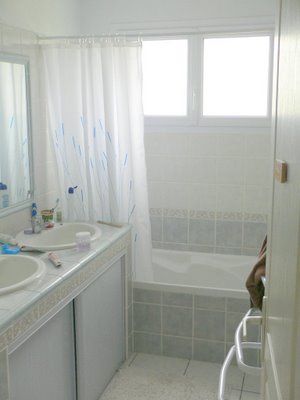 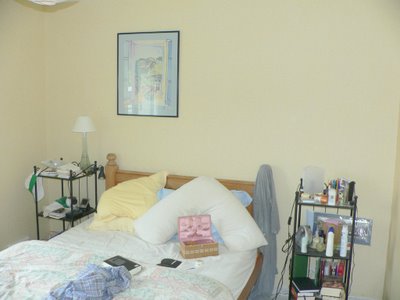