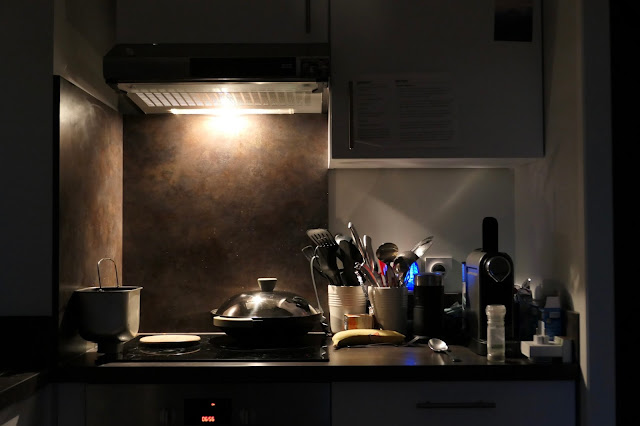 Today marks the end of four weeks of sleeping on the sofa. The sofa is OK and we sleep as well on it as in our bed, but it makes getting up awkward. I sneak into the kitchen and prepare my forage in the half-light of the window and the light from the cooker hood.

Today we take Gwilym to the airport. It may be the last long holiday he takes with us. Next summer he'll be preparing to marry. It's been a very happy time together, with adventures in Toulouse and in an open top Mini.

Tomorrow morning I'll be able to get up and put the lights on, change and go running, come back and get on with my day like normal. It'll be sweet. Bittersweet.
Posted by Alan at 9:47 am No comments:

It's such a long time since I frequented any of Bordeaux' coffee emporia.
Not only that, but certain of them closed for the whole month of August.

So on Thursday morning I high-tailed it into Bordeaux to visit Café Piha. Family members declined my invitation to come protesting the extreme heat (we are well into the thirties just now).

I arrived to find the place buzzing and got my nice Americano. Then the second man, whose name I forgot, appeared and invited me to join a group coffee-tasting session. 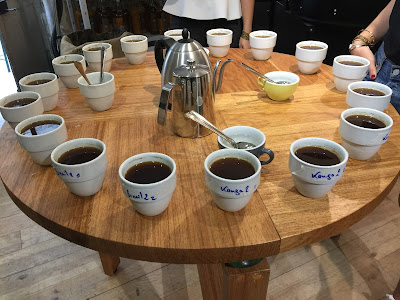 The idea is that when a batch of coffee beans comes in you have to work out how long to roast it for. Coffee is a natural product. Every batch of beans differs. Each batch reacts differently to the heat. The roasting has to be fine-tuned to achieve the optimum conversion of sugars for the optimum release of flavours.

Friday morning found me charging into town once more as a new Anticafé has opened right by the cathedral! The Anticafé is a place where you can go and work and you pay by the hour, by the day or by the month. The price you pay includes a workspace, fast wifi, access to printers etc. and also unlimited drinks and snacks.

It's a great idea for me, especially in such an accessible place.
Also the hourly rate is not excessive.
I joined straight away and I'll start working there this week.
Posted by Alan at 9:53 am No comments:

Gwilym's fiancée, Beth, returned to the UK on Saturday and on Monday and Tuesday we reserved a Citiz car, a Mini convertible. It is stationed at Gambetta in the centre of Bordeaux so on Monday morning I scuttled in on the N° 4 bus to get the car.

What fun! The new Minis are very plush, but really quite small. Just room for two small people in the back, a tiny boot and not very practical, but for swanning around in the sunshine it was wonderful.

We went off to Bazas. It is a small town with a cathedral well known for it's façade, and we took the small roads to get there. Driving in a convertible in blazing sunshine and 34°C down French roads lined both sides with poplars is just wonderful. We did get rather more brown than one should, except Catrin who could sit in an oven at 250° and still not brown, but sunscreen helped a little.

On Tuesday it was even hotter so we swanned around on local roads instead, going for the shopping, then visiting a local air-conditioned shopping centre for smalls, etc. Large things would not have fitted in the boot, anyway. 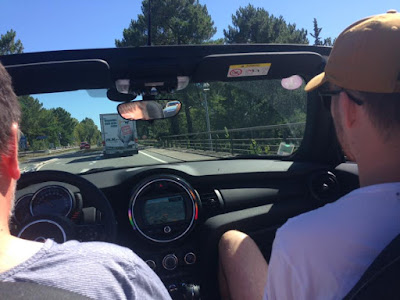 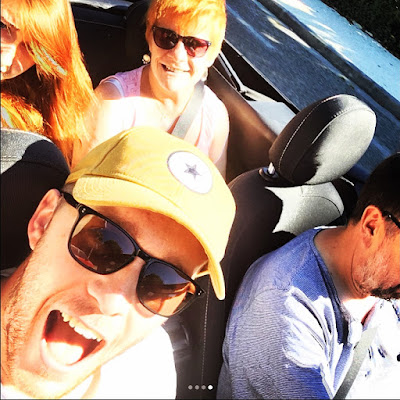 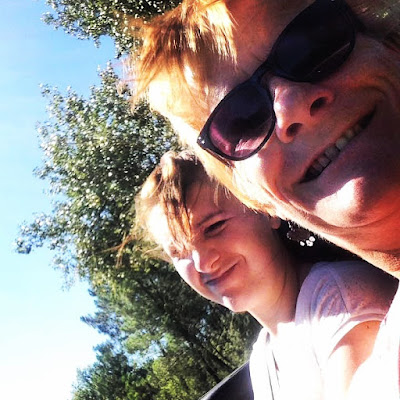 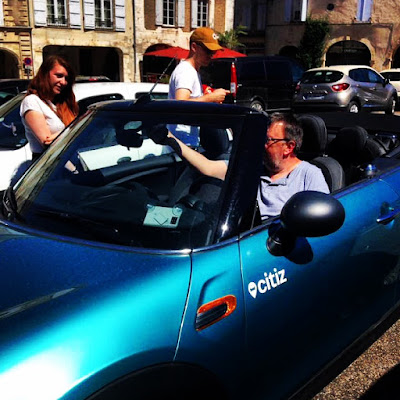 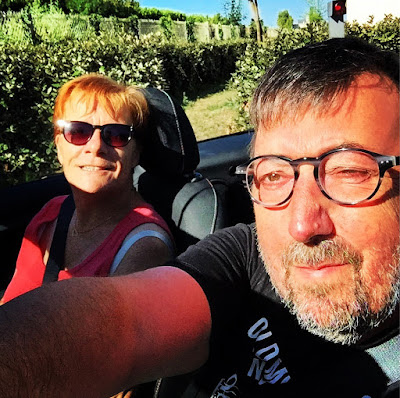 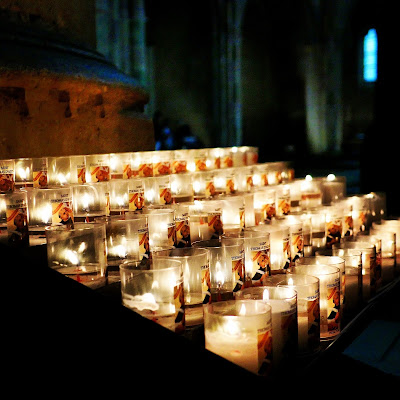 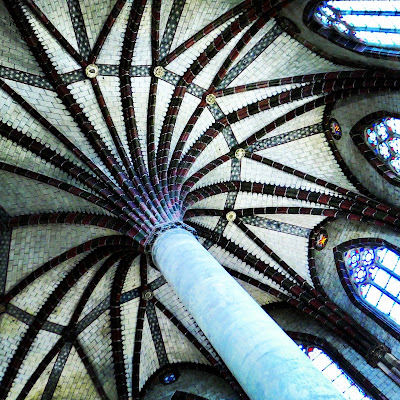 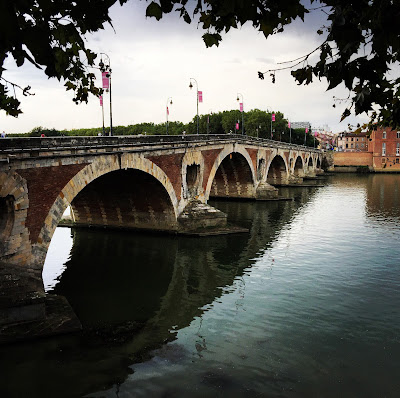 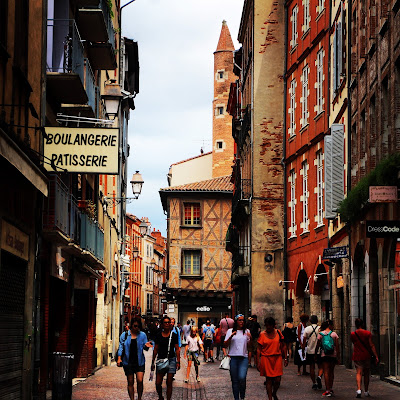 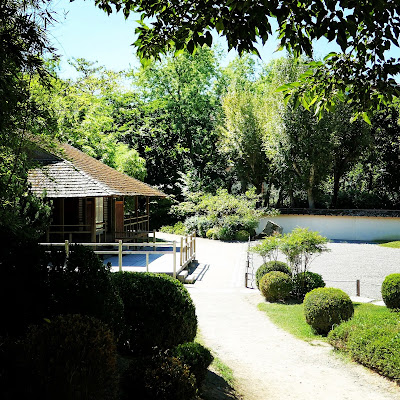 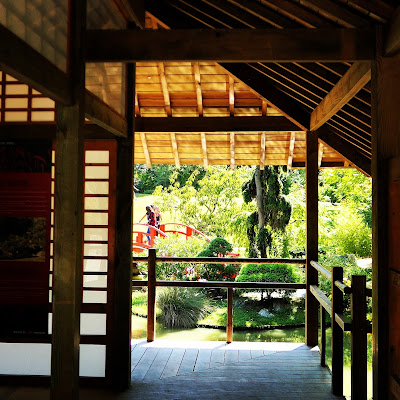 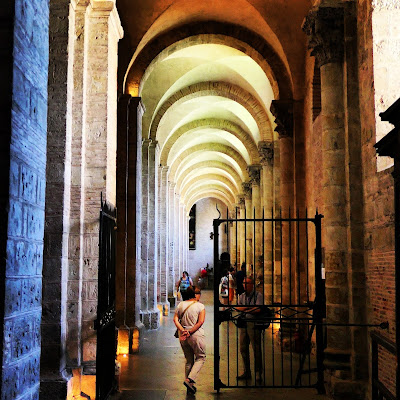 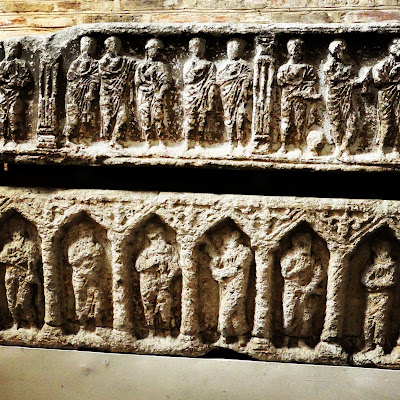 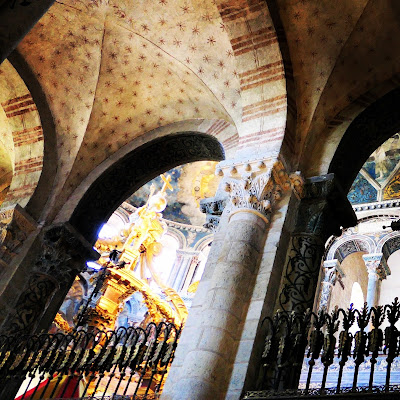 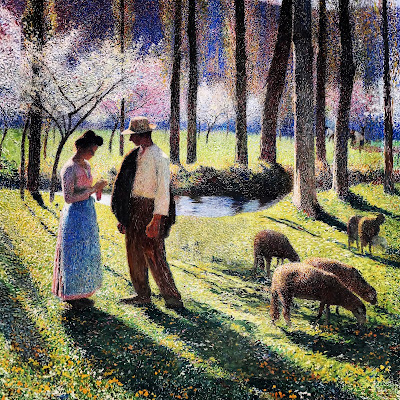 We just got back from a short stay in Toulouse

We looked for somewhere easily accessible from Bordeaux, somewhere to explore, somewhere we didn't know too well. The buses to Pau and to Bayonne from Pessac are not running at the moment, but there were really good fares from Bordeaux to Toulouse, and we found a nice flat for 5 on AirBnB available when we needed it.

The bus was as OK as any of these kinds of things are. Long train journeys, flights, bus trips, they're all a bit awful, but if you have music and something to read then they're OK.

The flat was super. Very stylish. Two bedrooms, so Pat and I had one and the two girls the other. Gwilym slept on a sofa bed in the living room. There were windows onto the street (see below) and a nice balcony over a private little courtyard with a big-leaved catalpa and a nice, black cat.

The flat was very near the Palais de Justice and not far from the river. There were supermarkets, bakers and cafés all around.

The one drawback with the flat was the way the front windows faced the street. During the day it was quiet, almost traffic-free. At night it was NUTS! The early hours of the morning had loud drunks, rubbish collectors and something I can only imagine to be a street washing machine. Why so early? I mean like 3 or 4 am.

We visited the tomb of Thomas Aquinas and some of the Toulouse parks, as well as the Japanese Garden and the Basilique de Saint-Sernin. We also used a Citiz car to go to Carcassonne, which was very hot and very crowded indeed!

I'll pop some photos on over the next few days.

So the man came to fix the patio door.

It turns out that with a dirty great heat gun you can soften the uPVC of the window frame and it will return to its previous shape all by itself.

For those areas where some uPVC has been broken off there is a resin based filler that you mix up and mould to the shape required and after some minutes it is hard and set.

A couple hours work and the window is pretty well good as new.

Our holidays are beginning with the visit of an elderly friend from our home church in North Wales.

On Sunday Patricia spotted one of our next-door neighbours, the lads whose door is opposite ours, putting something in the big bins. She scuttled over for a chat. We're looking after their cat at the end of August and we talked about doing another apero or something to invite all the residents of the apartments. They suggested that if we do it at their place we could have a barbecue, so it's arranged for the latter part of August.

Today we scuttled down on the tram to the quays and took our ease, eating extortionately priced ice-cream on the terrace overlooking the river, and running the gauntlet of innumerable cyclists, skateboarders, uniwheelers, roller-skaters and other sundry light rolling-stock. As we staggered back to our flat we bumped into another near neighbour, a teacher from the language school who is also a travel writer and poet. We'd bumped into her before on a walk round the vines years ago, and she told us where she lived, so a while ago I looked out for her house and ... somehow ... just spotted it. We'd intended popping a card in to invite her round for a tisane, but we intend so many things.

Anyway she rounded the corner and did a double-take. Then she slowly remembered who we were. So now we have to pop that card through and invite her round for that tisane.

Sunday evening was very pleasant. We were lower in numbers, barely twenty, but super folk, some new folk, some not used to church - the service in our home won't have helped with that much - then hot dogs and Uno and music on the terrace. Two jazz pianists. Chinese and South Korean exchanging phone numbers. One chap's prayer that almost had me blubbing. Ages from 80s to 20s. Almost everyone was resident in Bordeaux. No holidaymakers this week. And one chap said it was the best evening of his life! (I didn't think it was that good, but hey...)

Picking up an elderly visitor from the railway station

An older lady (like 80?) is visiting us at the moment from our church in North Wales. She has brought a wheelchair, but is able to walk short distances, and she came by train from up in the Vendée.  We were to meet her at the central railway station in Bordeaux.

So yesterday I went in to recce the situation. The station has a special desk for these things. I asked the charming lady what she would advise, to drive in from Pessac and, if so, where we could park, or to travel out to Pessac by train.

"You can stop in the pick-up area for a couple minutes."

"And if the train is delayed?" She made the pursed lips sign that says you have made a valid point that has no easy solution.

We decided not to travel in by car. The train was delayed. An hour. I took my life in my hands and drank an iced frapperooni from MacDonalds while Pat drank a big coffee. We shared a cronut. I won't eat one of those again.

The train arrived and a friendly man from SNCF helped us get our friend from the train, then pushed her across the tracks to where the Pessac train was waiting. The Vendée train, in which she had spent five hours, was an old, bouncy thing from the 1970s. They're OK, but you have to clamber up and down into them. The Pessac train is a swish, modern affair that you enter on the level from the platform. We were glad we took that option.

Then the Citiz Clio estate to get us to the flat and, hop, we're installed.

The refurbishment of our place of worship has been held back by a delay in delivery of a staircase, so now it's scheduled to be finished for the end of August.

I was going to, honest

Yesterday I gazed out of the window at the blazing heat and longed for rain.

Yesterday I looked at our dry, crisp but patchy lawn and vowed to mow the small area under the windows which is not only not dry and crisp, but also has broad-leaved weeds like plantains.

I thought, "I will mow that section tomorrow morning before the sun is high and melts us all."

Tomorrow has come and it is raining.

Slowly the strong currents of the Garonne erode the foundations of the Pont de Pierre, so from time to time work is needed to reinforce them. In the city's tradition of making a virtue of a necessity, this has led to the Pont de Pierre becoming a great big cycle-path right in the heart of the city for the months of August and September. Trams and buses can use it, as well as pedestrians, but no cars, vans or lorries.

A group called Vélo-cité held a quick party in the middle of the bridge to mark the beginning of the two months. The Mayor of Bordeaux says that if traffic is paralysed then the bridge can be reopened, but I should think that for August all should be well. It's holiday month anyway, and the bridge only allows single-file traffic in each direction. 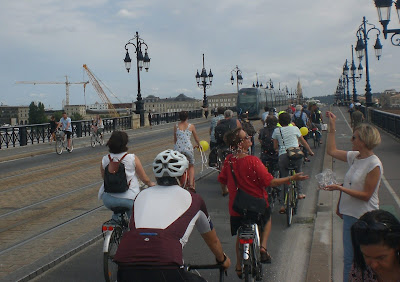 In effect cars, vans and lorries are diverted upstream to the Pont Saint-Jean or downstream to the new lifting bridge, the Pont Chaban Delmas. Maybe we could foresee a day when cars are diverted away from the riverside altogether, and around the boulevards ring-road. This would make the riverside promenade safer and more peaceful. It would make Bordeaux effectively a town centred on a huge, riverside garden.