What a week - I HATE computers

Firstly we decided to switch everyone from the cheap and cheerful but it doesn't work very well mobile phone operator to a rival that actually costs the same but work a whole lot better. When you do that you lose your mobile phone number while they switch you across. So we've had first Pat, then Catrin, then me unobtainable by mobile phone for a day or two.

THEN, they decided to come and fix the mobile phone cabinet outside the block of flats. It was largely demolished by a car crash last Christmas Eve but was functioning fine. Every now and again someone would come and look, then go away again, but on Monday some guys came, laid the box flat and redid the base. At 5pm everyone's internet was cut off, taking all television and telephones with it. It isn't yet restored to working order.

Is it an improvement? Hard to say...

On Monday I got home to see a van parked outside the flats and two men working on the telephone cabinet. This is the large metal structure that holds all the telecommunication gubbins for the flats. Last Christmas Eve, a wet day, a car skidded the white lines outside the flat and knocked the cabinet over into the fence and bushes behind. They'd come to fix it, at last!

At 5 I noticed our internet service was cut. I looked outside. The telecoms cabinet, previously leaning, was now lying flat on its side. I phoned the internet provider, who confirmed that the internet, tv and phone was cut off for all the residents of our block of flats. It may take 8 days to get it back, worst case scenario, quoth she.

Oh well. It's made life kind of peaceful!

We're having some beautiful days

but there are nasty viruses going round. We've all caught a brief ninja head cold. Mine lasted half a day, Pat and Catrin had a couple of days of misery. 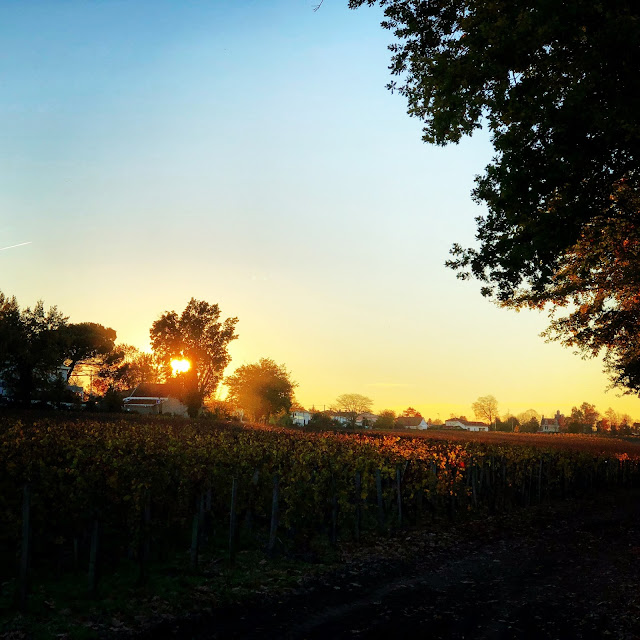 A year of Trump and six months of Macron.

I just thought it should be marked in some way.

It is COLD in Pessac. Very cold.

And there is this ninja head-cold going round.

It gets you suddenly, hits you very hard indeed, then leaves as suddenly as it arrived.

The internet salesman wrote my name on his form.

He scrubbed out the I.

So it is that for the purposes of our telephonic communications now I am called M. Alain-Thomas d'Avey.

I think it's easier to change my name than to change the system.

Her Majesty's Revenue and Customs

I managed to get through to the Royal Bank of Scotland on the phone number they gave me. The charming lady who answered was not Scottish. I explained our situation.

A song for Remembrance Day

In 2013 I had a long exchange of correspondence with Her Majesty's Revenue and Customs, the upshot of which was to establish that I am truly and completely fiscally resident in France, with no UK income and no tax liability. It took some months to establish this to everyone's satisfaction but I received several letters from different tax officers, sometimes all on the same day, all agreeing to and affirming this.

Now then. We have a bank account with Virgin One which was our main account until we left the UK in 2005. I loved this bank account very much. I wish there was a similar thing in France. When we left the UK we didn't close the account and we currently have £5 in it. I hope that if one day we return to the UK we can simply continue with that account as we did before.

Then they sent me a form to fill in to show that I am fiscally resident in France. It demanded strange things, like a photocopy of a passport issued by a foreign country and endorsed with a stamp from a UK consulate. I don't have a passport from a foreign country (yet). They helpfully supplied a phone number if you needed help. I dialled it. I got no response. I called Virgin One. "Oh, that form is nothing to do with us. It's RBS."

I considered that for the sake of £5 and having had official confirmation from several of her majesty's officers that I am fiscally resident in France I had done all I could reasonably do. But no. I am being chased up. So I shall write them a letter to enclose with my form.

Well I don't know what went wrong with bus 4 yesterday

Pat and I met Catrin at 4 for tea and cake at Horace, then after buying a book as a gift for someone we went to wait for the bus 4 home.

It wasn't snow, but it could have been. The evening was dark and cold and the rain was falling heavily. Still, we wouldn't have long to wait. There's a bus 4 every ten minutes.

People said they had already been waiting a long time. We decided to walk to the previous stop, where the warmth from the engine of a waiting bus 15 gave us some welcome cheer.

Eventually a wave of excitement came across the little crowd at the bus stop. Here it came! The bus 4!

We squirmed on with the other folk. Somehow the seat right at the front was free. I sat in it to occupy it for Pat who was following me, but the bus got so full we couldn't change place.

"We've been waiting half-an-hour. Two were due but never came."

Everyone got on board, but at the next stop people were too numerous. "I'm shutting the doors", said the driver. There came some furious hammering. It was someone handicapped with their carer. The driver let them on and they squeezed in somehow.

Pat recognised a chap with Downs syndrome who often sings on the bus. A couple of minutes later he started up. It was party time in the crowded bus.

We wondered where people would get off. Palais de Justice? No. La Médoquine where there's lots of flats. No. Almost everyone stayed on till Pessac Centre, where they were replaced by collégiens and lycéens.

Ours was the next stop. We got off, thankful to be home briefly before charging out to take bus 4 again to Pessac Alouette.

Some music for Thursday

Some music for Wednesday

from Jean Françaix
Posted by Alan at 9:41 am No comments:

Running in November - It gets COLD!

Oh boy was it cold this morning. I had on a nice thick tee-shirt, "lounge pants", a sweatshirt and a tubular hat for my head, but my eyes still watered with the cold.

I want to increase my distance bit by bit, but this was not the morning to do that.

This was when I confessed that I'd had a couple of spots of shingles but that after a couple of weeks they cleared up.

"Yes, I had too many late nights."

We discussed bedtime, breakfast time and running for a couple of seconds while she played darts with my arm and a 'flu jab.

I would have given you something to make it less painful and long.

She did my prescription for my life-giving herbs and potions.

I looked at it.

"I'm going to have trouble with the pharmacist."

"Because the one thing is "for six months" but the other doesn't say anything. If I go to the distant pharmacy where they know me they do it anyway, but the nearest pharmacy won't do it."

She changed the prescription, to my great relief.

I'm going to stop typing now because my dartboard arm is sore!

This salesman called on all the flats from Bouygues Telecom telling us about this super-duper deal on  installing fibre-optic internet in our flat, and since all the cabling was already in place it would be really easy, and it was at a bargain price, and so on and so forth.

After a couple of days deliberating I decided to go ahead with it. That was back in September, I think, and the technician called today to set it all up.

And there we are! Fast internet, cheaper than we were paying before, and with a nice, elegant little box instead of the humungous white blunderbuss we had.

The other evening Pat and I were walking home from the tram stop at about 22:30 or thereabouts.

As we walked through the quiet streets we heard the owls hooting again as they hunt over the vineyards.

"If we lived in the centre of the city we probably wouldn't hear the owls in the evenings."

A little further on we heard a strange bird sound coming from up above. There was a big tree, but it wasn't coming from there. As we squinted a little we finally saw a flight of cranes going overheard, heading south for winter.

"If we'd driven home in a car we wouldn't have seen or heard them."
Posted by Alan at 6:40 pm No comments:

You stare at computer screens and barely understand one word in 10.

Announcements in trains only make any sense at all because of the context and the place names.

Menus are not really a problem because most things we encountered were either a variant on bangers and mash or escalope of pork or veal (Schnitzel is an escalope in breadcrumbs).

Pronunciation is phonetic and regular but it's still utterly baffling. And hard to get your mouth round.

But I did make two minor victories.

So glad to get back to the Francophonia!
Posted by Alan at 9:12 am No comments:

It's all happening, isn't it!

500th anniversary of the posting of Luther's 95 theses.
Hallowe'en
I finally got to open my PlayMobil Luther figure.
And we put the clocks back an hour.

It's a good job that today is a public holiday in France to allow us to get over all the excitement.

Toussaint, All Saints' Day, is the big deal here, and outside the cemeteries there'll be lots of stalls selling potted chrysanthemums for people to buy and place on the graves of their loved ones. Chrysanthemums are good because they are pretty hardy.

But because it's a public holiday the streets are very quiet. The number 42 bus that turns the corner just outside our flat doesn't run on Sundays or public holidays, so it gives us a real sense of stillness.

I went for my run earlier and nothing was moving at all. No sound of cars in the distance. Just stillness. And of course my clump, clump, clump and the Schubert going round and round in my head.

November 1st is also the day it gets cold in Bordeaux, usually. This year I turned the heating on last Sunday, though. Two or three days early.

For me it's a day of admin. I have LOTS of that to do. Some is in French legalese that will be tough and tiring. Oh well... The sooner I tackle it the sonner it will be done.