http://www.veritas.org/can-scientist-believe-resurrection-three-hypotheses/
Posted by Alan at 9:11 am No comments:

These started last Saturday with a surprise party.

I had said some months ago that I expected a surprise party for my sixtieth birthday. (People need to be aware that we're sixty and we're not far off retirement!) However my birthday coincided with the visit of a team from the UK, so it wasn't going to be an easy thing to plan. Thankfully, I am an easy person to dupe.

So Mrs Davey, having loaned her key to friend William the previous day for evidently sensible reasons, coaxed me out to our nearest classy coffee shop, Oven Heaven. We settled down and drank our coffees, then we needed to get some shopping, so I was relatively easily persuaded to trudge off to Lidl. With our milk, butter, cheese, vegetables, fruit, power drill, ski-pants and folding stool safely stowed in our vast bags, we set off. The heaviest things I'd put in my rucksack, then we shared out the other bags and set off like donkeys on the dusty road.

As we got into the flat I was puzzled by how light it was. Hadn't I lowered the shutters. "It's very..."

People were hidden around the door. Then food appeared as well as a rather spectacular cake, which the master of ceremonies insisted that I cut. "Alan is now going to cut the cake!"

My birthday was on the Thursday, so I'd inveigled someone into bringing a caterpillar cake from the UK. There were three other birthdays that week, so we had a good time wishing a happy birthday to Alan, James, Thierry and Tom.

The UK team had come to run an Easter kids club and it went very well, with 18 kids. Their parents mostly stayed with them, so we may need to take that into account when we plan another.

This has become my current favourite French expression because our line of tram is closed for maintenance for ten days during thr school holidays so they've put on buses de substitution instead. They're great but they make you appreciate the trams!

They're out for my birthday! 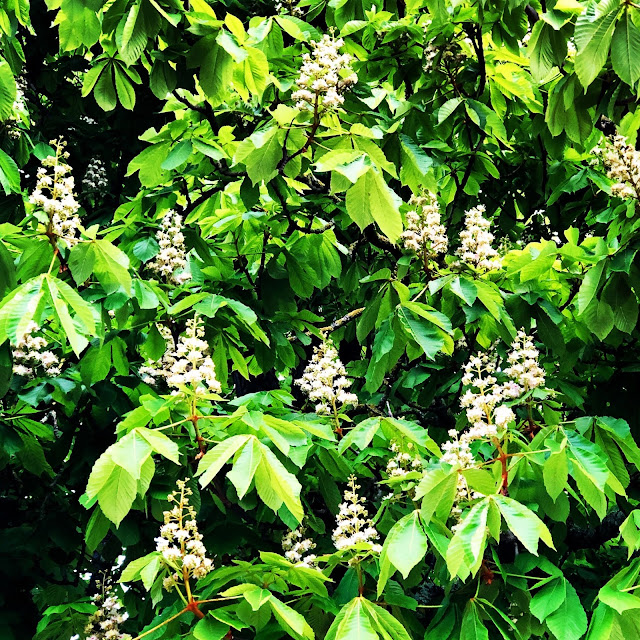 I realise that this may actually be bad news of the harbinger of doom type, but every year I am bowled away by the blousy splendour of the horse-chestnuts and this year they're out for my birthday! So many candles! Who blew the gaff?
Posted by Alan at 5:37 pm No comments:

No sounds.
No badges.
No banners.

Also repeating alerts for text messages - turn them off.

I am also somewhat inappropriately excited about my impending SIXTIETH BIRTHDAY

Maybe also in the UK and elsewhere in Europe!

We're very excited about the varied earthworks taking place below our flat!

I hoped for an explanation but I got compensation

Swissair never explained why our flight was cancelled or why they told us such conflicting things, or why the meal was so bad. I think there were just too few passengers booked on it, but what do I know?

But in place of an explanation they have given us some monetary compensation.
We'll do something nice with it.

It's so exciting! I'm in the countdown to cheaper tram and bus travel!

In less than three weeks I'll be in that TBC office signing up for a cheaper season ticket!

I must also investigate the railcards here.