Catrin, our daughter, has her rendezvous at the prefecture tomorrow for her application for a carte de séjour. All should be straightforward, except...

because she entered France as a minor they ask for different supporting documents, including something to confirm the date on which you entered the country. This could be our rental contract, or my tax return, or one of my pay slips. From 2005.

On the tax website the earliest tax return I can access is from 2008. It does make mention of 2005, saying that we used up all our allowances for that year, so I've printed that off for them.

The earliest pay slip I still have is also from 2008, but it says I entered employment on 9 September 2005, so I have also printed that off for them.

Yesterday evening Mrs Davey got her second AstraZeneca injection and, with it, her certificat de vaccination.

The sheet of paper that tells you what's been sent to your health records also has a QR code. Scan it into your tousanticovid app and it turns into your vaccination certificate.

I'm due in the third week of June.

Cake and coffee in the rain

So yesterday we got the chance to go to the best café for getting good coffee on the terrace. It's a little way out of the city centre and has a huge area of paving dotted with lovely trees, so they put tables and chairs under the trees.

Yesterday it was raining, but hey, so we went anyway and met up with some of the folk. The guy in the coffee shop brought us out dry chairs and placed us under the awning, so we were fine. Kind of. And it wasn't raining much. 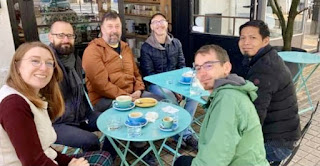 Today we take our next step out of confinement

1) café and restaurant terraces can open.

Now come on England, put France on the green list!

How can you do a duvet day when the sun shines ?

In addition the weather forecast for all this week is for cold, hard rain. After a glorious Saturday. With a public holiday on Thursday and a long weekend to follow - the Pont de l'Ascension. In the afternoon I suddenly realised what would help. Spend my day off on a duvet day !

A duvet day is something people use when they can no longer cope with anything. They stop everything and spend the day on their sofa under their duvet watching diverting films or binge-watching situation comedies.

So yesterday, my day off, I rose early and looked to see what I fancied binge-watching. First mistake. Nothing grabbed me at all.

I opened the windows to change the air in the flat. Second mistake. The day looked glorious.

I ate my banana and chocolate porridge. Pat got up. "Duvet day today", she said, "Wow, what a gorgeous day!".

It was decided. We would go on an adventure instead into Bordeaux to find lunch and a park bench on which to eat it. We ventured out and visited Pat's doctor and the pharmacy, but quickly realised that though the day was indeed glorious, the park benches all over the city would still be absolutely saturated from Sunday's torrential downpours.

So we changed our minds and got lunch from our favourite emporia - chicken salad for me from Chicko's, ham salad for Pat from Eat Salad, and we caught up on a rather whimsical detective series from some years ago, called "Murder City".

So Pat got her vaccine at the beginning of march, I think, and her original instructions said to get her second injection at the beginning of May. So she's been watching Doctolib for appointments and when one came up tomorrow at our local GP she booked it.

A while later she got a phone call asking for her relevant data. We were puzzled because they did have it, but hey.

Then a little later still she got a message saying her appointment was cancelled because the gap between the injections was too small.

So we went down to ask.

It appears that they have changed the rules. Where before you had a eight week wait between injections, now the wait is twelve weeks. So she's due her injection towards the end of May and I'm due mine on 24 June.

Meanwhile the UK have brought in the traffic light system for visitors and France is Amber. This means a PCR test before coming, another 2 days after arriving, a third 8 days after arriving and ten days quarantine in an address that you have given to the authorities.

Since I am due to attend a conference in mid-June with a friend from the church here then we need France to be promoted to green by the beginning of June, ideally.

Otherwise there's no London conference for us. We could still go visit our son in Norwich, quarantining at his house. Or we could delay our visit until we have both had both our doses of vaccine.

It's well-nigh impossible to find sugars like demerara, muscovado, etc. in France. In the supermarkets we have cassonade, which is a light golden sugar. Sometimes you can find organic dark brown sugar with a lovely toffee taste, great for making ginger cake, for example, but not often. But things like treacle? Forget it.

I have long puzzled over this. France had colonies in the Caribbean and part of France is in South America, so surely...

Then I heard someone talking about the unique taste of Mexican Coca Cola (really?) and the difference the sugar makes and I twigged.

I think it all goes back to the Napoleonic Wars. During the wars the British navy blockaded France and prevented trade with the colonies. This cut off the supply of sugar.

Napoleon got people doing research and development and since then France has been self-sufficient in sugar, produced from sugar beet.

This means that for two hundred years there's been no need to import sugar from anywhere else, and so those dark treacly sugars you can get from sugar cane are not widely available.

Last night was the Assemblée Générale of the local branch of the Conseil National des Evangélique de France. One of the big items on the agenda was electing new committee members. There were four candidates. Two were elected.

This election was necessary because two of the current members were leaving the committee - our excellent former délégué départemental - and me.

Soon after I arrived in Bordeaux I was taken along to what we then called the "Evangelical group" - a group of pastors and christian workers who met to pray, to share news and to encourage each other. With the formation of the CNEF about 10 years ago now, I think, we changed the group into a local CNEF group. I became its chairman. Later the secretary resigned and - as a temporary measure - I took on the essential functions of the secretary.

So I'm glad to pass on the baton. I hoped to see a younger and more diverse committee, and it is certainly younger. So this morning I typed up the minutes of the meeting for my last responsibility.

Both Pat and I have had our first dose of AstraZeneca, Pat at the beginning of March and me at the end. That means that she is due her second dose now and I'm due my second dose at the end of May. This matters to us because we would like to visit England in June. So each day we hunt down a place to get our second doses using the excellent French medical services website.

Today a pharmacy on the right bank at the end of one of the tramlines was offering appointments over the next few weeks, so Pat is booked in for next Friday for her second injection.

Journey out of confinement

Bit spasmodic, this blog, isn't it!

Anyway, yesterday France began its journey out of confinement, by lifting the 10km limit for journeys.

It was my day off, so Mrs Davey and I celebrated by hopping on the 11:30 to the beach. We bought sandwiches at the station and ate them on the train, surreptitiously lowering our masks, then walked happily up and down the waterfront, soaking up the sun rays, breathing deeply the clean sea air and speculating as to which size of powerboat we should aspire to. After some reflection we saw a small black dinghy that we might eventually stretch to!

It wasn't terribly warm but it was awfully pleasant. We ate chips and ice-cream and chatted with the chip stall-holder. They're surviving from the commerce on sunny days and longing for the day when they can put out tables and serve meals. That is scheduled for the 19th of May.

We got home really tired from all that se air. It really got in our lungs! But we had an Elders' and Deacons' meeting in the evening about us for which we needed to keep our wits. Our E's and D's are a fine bunch and we finally went to bed tired but happy.