Some photos of Istanbul

taken either with my phone or with my compact camera. My camera has a fixed lens, at 28mm. It's a little wide for my liking really. I prefer a 35mm lens. It means you get lots of converging verticals, but you can fix those with a natty little programme called Snapseed. When I'm in the tram or the bus I enjoy loading photos onto Instagram, always with the LoFi filter and increased light. 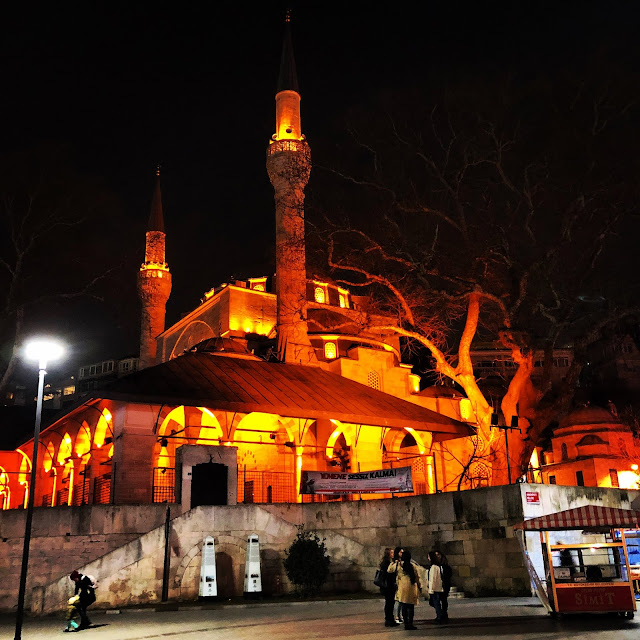 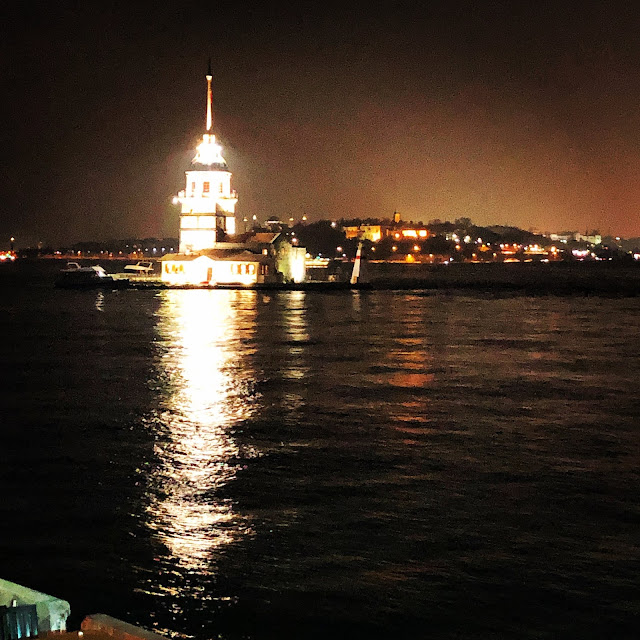 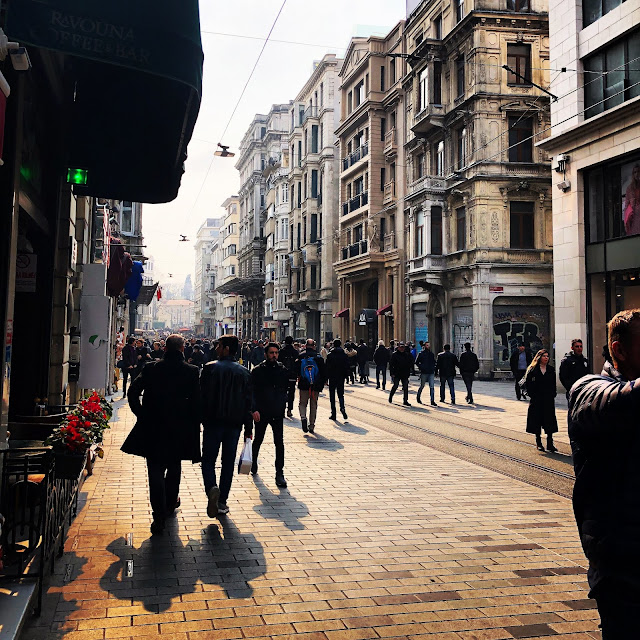 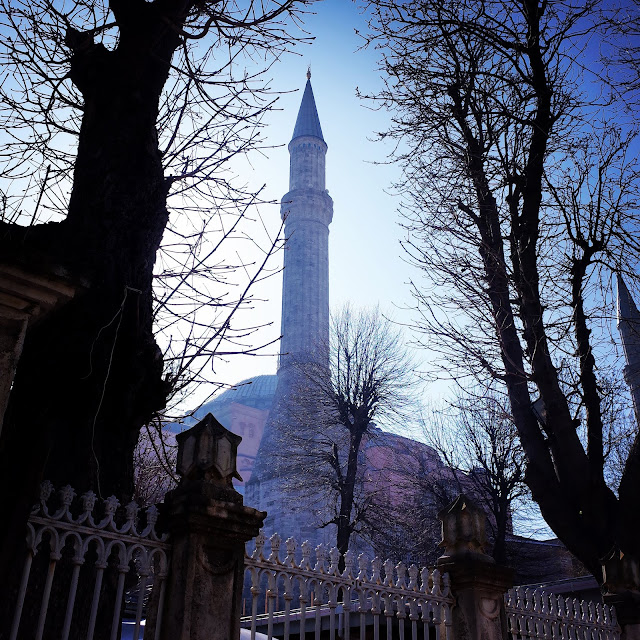 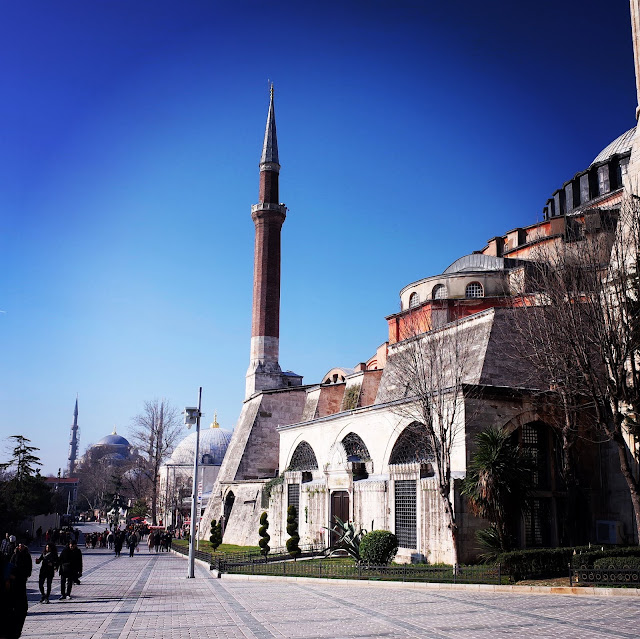 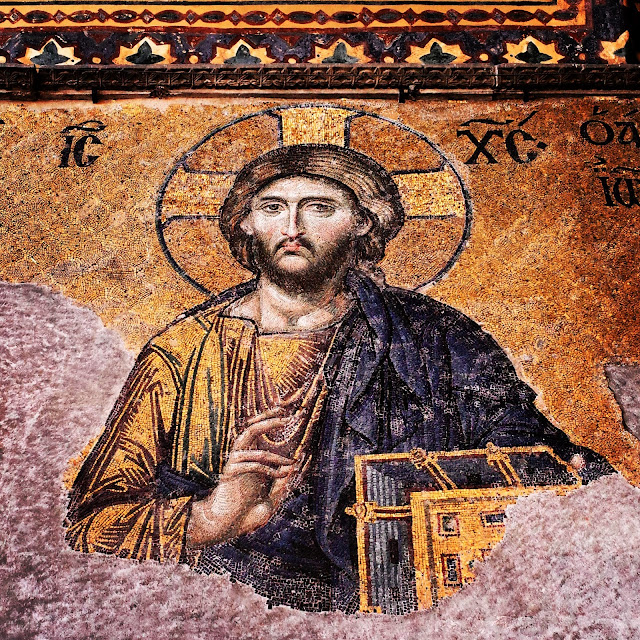 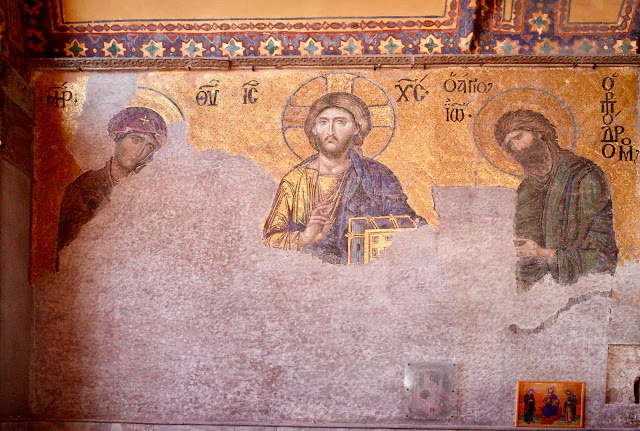 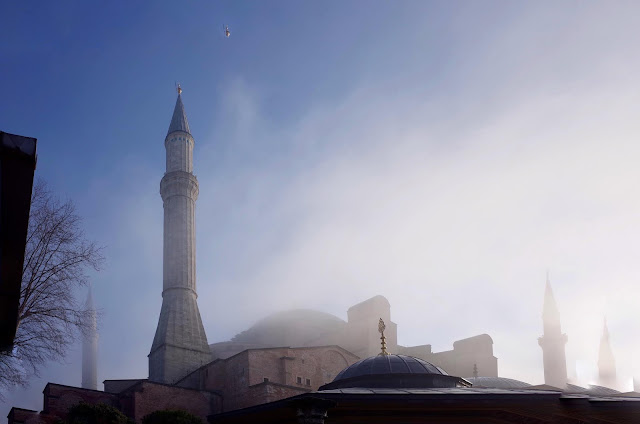 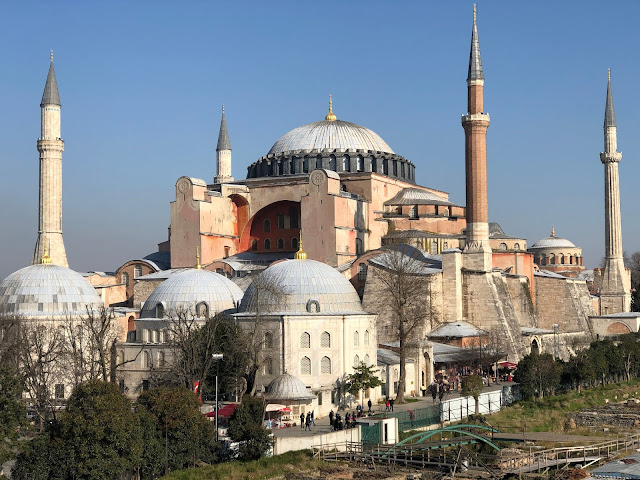 A quick journey to Istanbul

I left on Monday afternoon for Istanbul - firstly a fast train to Paris, then an overnight flight to Istanbul. I arrived at 4am.

After a bit of messing around trying to decide which bank machine to use, then eating breakfast at - oh the shame of it - Starbucks - I spent a while trying to work out how to use the transport network, then travelled to Sultanahmet, the historic heart of the city.

In legend the city was founded by King Byzas who gave it the name sometimes used for the early Greek period of the city : Byzantium. Then in 330 Constantine was attracted by the strategic position of the city and founded the new capital of his empire there: Constantinople. For over 1000 years the city would become the centre of the Greek-speaking, Eastern Roman Empire, while the Western Empire and its old capital Rome was overrun and sacked by barbarian tribes.

Constantine built churches. Hagia Eirene (Aya Irini) was the seat of the archbishopric and the site of the church counciles that took place in Constantinople. After the fall of Constantinople it never became a mosque though the cross atop the dome was replaced with a crescent moon. Now the building is used as a concert hall.

Nearby was built Hagia Sophia, then rebuilt, then rebuilt again from 532-537 in the reign of the Emperor Justinian after being destroyed in rioting twice. The last building was to stand for over 1500 years.

At the fall of Constantinople in 1453 the building was converted into a mosque, then in 1923 at the founding of the Secular Republic of Turkey, it became a museum.

Nearby stands the enormous Sultan Ahmet mosque (the Blue Mosque) built in the early 1600s and its nearby mausoleum.

The Sultan Ahmet mosque and the mausoleum open at 8:30 am, so on a bitterly cold and foggy morning I took off my shoes, put them in the supplied carrier bag and tiptoed across the chilly carpet to admire the tilework, the immensity of the mosque and the strange little coffin-shaped markers showing where the Sultan and his family are buried, some of his brothers and sons murdered in their childhood to prevent awkward political struggles.

Then off to Hagia Sophia (Aya Sofya) where I was overwhelmed by the grandeur of the building. I couldn't see Aya Irini - it's closed on Tuesdays. I tried again later in the week but arrived just after closing time of 4pm.

I had a busy schedule with friends, but some involved exploring the city a little. It is enchanting. Beautiful. High-tech. Clean. Crazy. Busy.

Shortly before going we saw a little report on the way the city cares for its stray dogs. It takes them off the streets for veterinary care, gives them a microchip, checkes for health and has a programme of feeding the city strays. The result is a city full of healthy looking stray dogs who are extremely good-natured - like everyone's pet. They do tend to attack the wheels of pasisng cars, trucks, scooters and the city cleaning wagons, however. There are also armies of stray cats who roam around in little prides, lazily enjoying the city.

Once the sun came up it soon burned off the fog and the terrace restaurant of the Seven Hills hotel sold me a cup of hot chocolate to try to retore feeling to the toes, and gave me a panoramic view out over Aya Sofya, the Sultan Ahmet mosque and the Bosphorus with its myriad boats bustling back and fore.

Mrs Davey is immobolised by her back problem, so I scuttled out for a quick sortie in the sunshine. 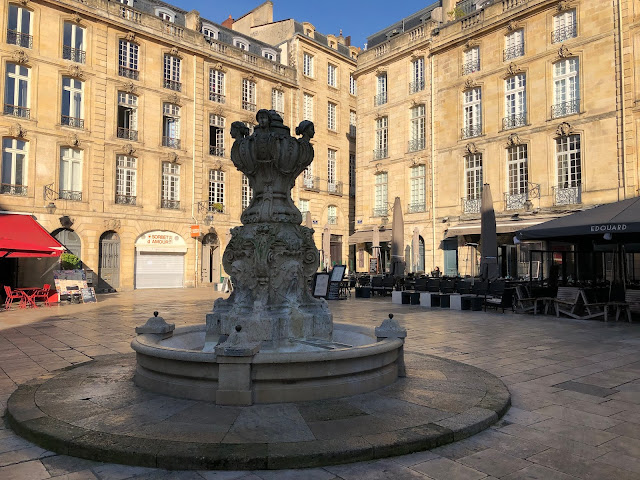 The police were gathering for this afternoon's ... meeting. 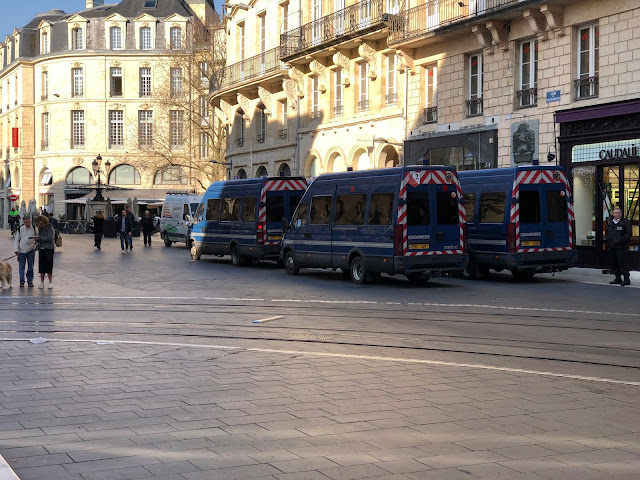 I chatted with another tram passenger.
We're all fed up of these clashes taking place in our city.
It's become the battleground of a conflict that is not ours. 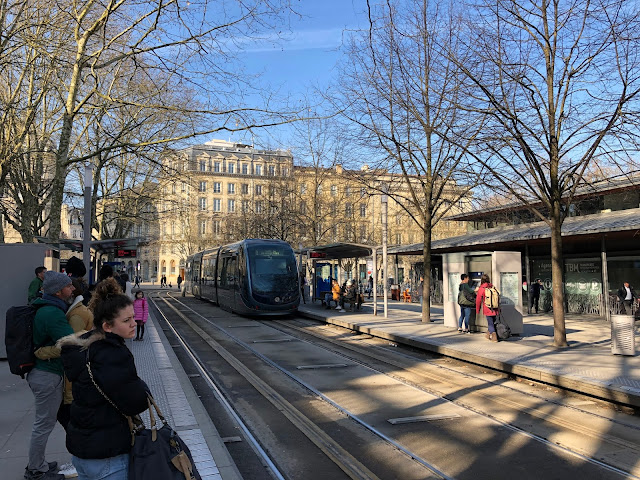 May you live in interesting times

Not to mention various other fascinating situations, like Venezuela, Nigeria, Zimbabwe, etc..

Now we heard yesterday that our beloved Mayor of Bordeaux, M. Juppé, is leaving.

He's been asked to sit on the French constitutional committee and was given 24 hours to give his decision.

He loves the city of Bordeaux and has presided over its transformation. The trams are from his mandate. The quotes were transformed from inner city wasteland to waterfront gardens. Our area is one of his projects. He's quick, funny, positive, optimistic and his watchword is moderation.

He was banned from public office for 18 months in, I think, 2003, because of his implication in the Paris fictitious jobs scam that siphoned funds into someone's electoral campaign illegally, if I remember rightly. He ceded the job to his deputy, Hugues Martin, went to Canada to lecture at a university and afterwards came back and resumed his work.

Then today we heard that the Airbus A380 programme is over. In 2005 we saw the first wings float down the river Dee near our home. Here in Bordeaux we regularly see the barges marked "A380 on board" going up and down the river.

We'll miss them terribly and we really hope there won't be too may job losses, especially in North Wales.

Panoramas of the Ars

It's a beautiful day here though we had mushy peas / a pea souper again first thing. 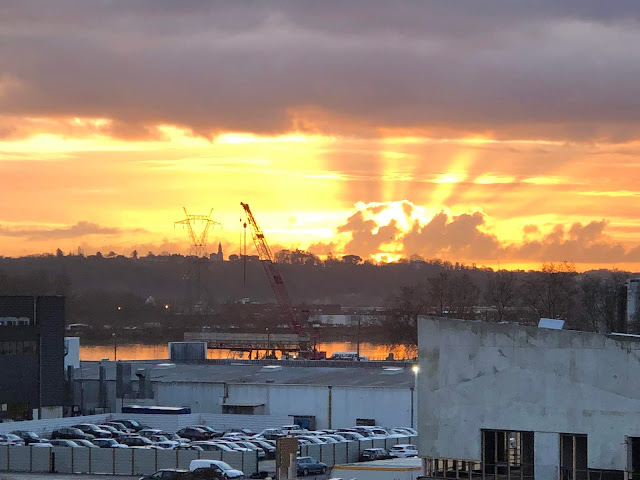 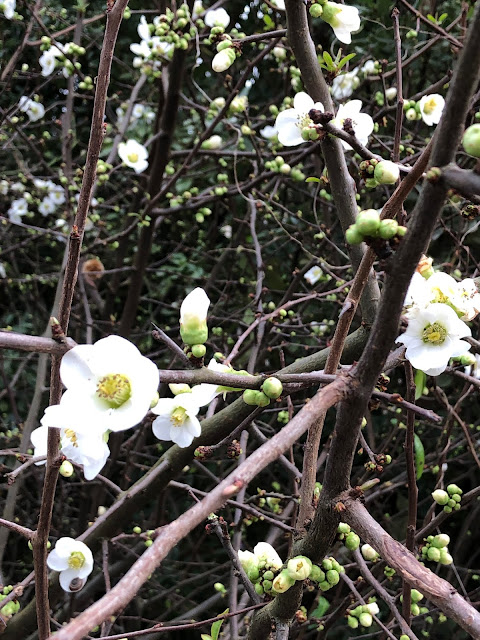 Yesterday as the day dawned we became aware that we could see nothing whatsoever out of our windows. There was a complete and total whiteout.

I've experienced this just a few times in my life during heavy snowfall, but it wasn't snowing.

The river is just about 100 metres away, and the mist was covering the city so thickly that the eye could see nothing whatsoever.

Pat looked at her phone to see what the weather app said : 100% humidity.

It took till lunch-time to clear.

Meanwhile I've been having weird dreams about driving a really nice car in the UK. It was some well-made but quite ordinary make of car, perhaps a Volkswagen? and as I drove I realised with alarm that my shoe was too wide to fit between the accelerator and the clutch pedal. Of course, this made braking awkward. So I decided to buy a pair of light shoes just for driving.

I had better get on with applying for an exchange of driving licence! If I lost the right to drive in France from April it wouldn't affect our daily lives much at all, but it would make some aspects of my work harder to accomplish. I wouldn't be able to get easily to churches that are off public transport routes. I'd probably have to give up CNEF33 presidency.

We live not far from the conservatory now and they put on lots of free concerts. Yesterday there was a clash. Early evening a friend was playing saxophone in the spectacular Maison Cantonale on the right bank. But we were wet, tired, hungry and thirsty and had only just got in, so we ate, then thought we might slip out to the other concert, at the conservatory itself, a percussion ensemble playing a programme of music influenced by Steve Reich. It ran from 8 till 9:30.

It was wonderful. I had been in a grey and damp mood, saturated by the grey and damp weather and daunted by a to do list so long that procrastination seems my only option. What better way than by listening to a roomful of immaculately clad music students playing xylophones, marimbas, vibraphones, glockenspiels, drum kits, bass drums and electronic instruments? We heard some reich, obviously, as well as some Thom Yorke (singer with Radiohead), Tangerine Dream (now I feel old) and some new compositions from the percussion department. All was wonderful. You could have sat on floor cushions on the stage surrounded by the players, but we liked our theatre seats so we stayed where we were.