I have seen two Pibaux at close quarters this week. This represents 10% of the total number of Pibaux in the world!

The first was just outside Mollat, the bookshop. It was being ridden by a gentleman who was discussing his itinerary with a woman. While he was stopped I took a quick photo and it is this photo that you can see below, with his head cropped to preserve his anonymity and to focus more on the Pibal.

The second was being ridden near the cathedral : we were both waiting to cross the road, I saw it and said "Un Pibal !" The lady riding it was very chatty and said that, yes, it is as good as they say it is, that no, it is light and she happily carries it up steps and so on and yes, the footplate is useful for carrying children and you can still pedal even with a child stood thereupon.

Here we have a photo of one of the pibaux, plus a vidéo with Philippe Starck 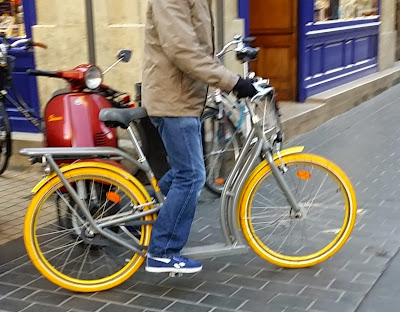