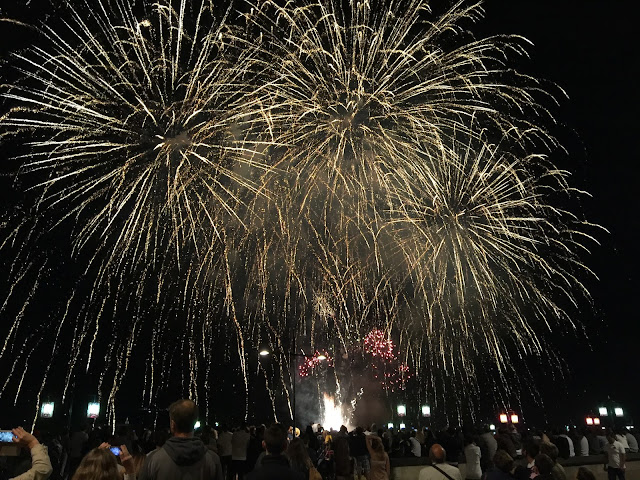 After our Bible Study and pizzas we travelled into Bordeaux on the tram for the 14 July fireworks. I had hoped to cross the river and see the fireworks from the other side, but we got our timing hopelessly wrong and instead watched from near Quinconces. There must have been thousands of people on the river banks, all going oooh and aaah. The police were very present and everything was just splendid.

On the way home I thought of the excellent summer we have had in Bordeaux. The way the city enjoyed the football tournament. The good humour of the police. The good-natured Irish fans winning a place in everyone's heart. The fan zone that saw some immense crowds simply enjoying the matches. The happy and peaceful atmosphere before and after the matches. The quiet satisfaction even when your team lost in the semi-final or the final. I thought of writing a letter to M. Juppe, simply thanking him for what he represents and for what he has achieved in the city.

Getting home from the fireworks was not easy. We walked several tram stops, tried to take the bus, went back to the trams and ended up getting home about 2 hours after the end of the fireworks display. On the packed tram one chap decided to remove his jacket. As he squirmed I thought how easy it would be for someone to get on the tram wearing a suicide vest.But our tram was full of good-humoured people. One lady tried to get on with her dog, but there was no room. "It's a dog! we'll take the dog! We love chihuahuas!", said some girls.

When there was a bit more room I opened my phone and saw a friend who lives and works in Nice report that he was safe. It is even simpler than I thought. You don't need a suicide vest. You just need a big lorry. At Bordeaux we were all over the quays. They were closed to traffic. But afterwards cars, cycles, buses, trams and people wandered everywhere in happy, patient cohabitation. It would be so easy to mow a crowd down.

So M Hollande will prolong the state of emergency another three months. Pray for Nice. Pray for our police. Pray for our civil authorities. And pray for the gospel to take root deeply.
Posted by Alan at 9:16 am