Wednesday started with couch to 5K - this time I remembered to make sure my phone was not on silent and that I was on the right day - so now I am officially on week 2, where the running time progresses from 8 bursts of 1 minutes to 6 bursts of 90 seconds. It's not exactly long, is it? Anyway. The moon shone kindly down as I lumbered along Rue Profond down to Rue des Poissoniers and back.

Then off to Maison de la Bible where we had a few clients and I spent a happy morning with my co-volunteer, octogenarian ex-doctor, Gerard. 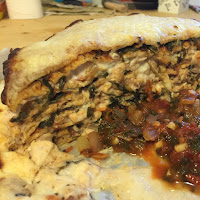 Lunch was left-over gâteau de crêpes, or as we now must type, gâteau de crepes, with chicken, spinach and tomatoes. It's essentially a lasagne with pancakes substituted for the pasta and constructed vertically like a cake, then iced with cheese sauce. It looks spectacular and I made it to celebrate chandeleur (Candlemas), the French pancake day, and our friend Sally's birthday.

Then some work on the passages for preaching and teaching this week and a quick modification of the Bordeaux Church website. Some time before Christmas we added lots of photos to the website at the bottom of the page. It was great, we thought, to give people a glimpse of the life of the church. Then a week ago I tried to access the site on my mobile phone. CATASTROPHE! All the photos made the page very slow to load. So I took the photos off again.

Then I saw a very simple but effective website from a new church in the UK. They've used Blogger to set up their site, as we have, and they have different pages for their declaration of faith, etc. Aha! So you can add pages. I'd seen the option some time ago but didn't know how to use it, how it worked or what it would give. So yesterday afternoon I spent a little time searching Google for instructions and fussing with the website and, hey presto!, a page for a declaration of faith, another page to outline our vision and another page where soon I will put the photos back on. And the front page still loads quickly, giving times and directions to the Sunday service. Jolly good! It still needs a little sprucing up here and there, but it's functional.

Then it was time to scuttle back into town to meet up with Peter and Alison for open-air preaching on the main shopping drag in Bordeaux. It was great to talk with folk about the gospel, including a communist who doesn't believe in God but believes in man. I told him he had stronger faith than mine, and that his political system could only work if you could make new people with new hearts, to which he agreed. Many of his replies were wonderful feeds in to the gospel. Things like "So everyone has to die before it can happen?" Another couple in their 40s or 50s were French-Tunisian, cut off by her family because she married a muslim Arab. I put my foot in it a lot. "And you've been together how long?" "A year". "Oh." (moves swiftly on) We talked about how Jesus reconciles us to God. Some lads from Portugal had very bad French (and no English) but they took gospels and they'll understand the basics if they read them. "You'd be good at this open-air preaching", said Alison, again. "Maybe, but I have a habit of taking on too many things than going nuts", I replied.

Then home. On the bus I met two girls heading for our house for a Bible study on Ruth which Pat was leading, so I hid in the bedroom till it was all over!