Before moving here we sold (some of) our bikes.

I sold the Raleigh Mirage "moutain bike" that I mistakenly bought some time in the 1980s.
I bought it because the wheels on my wonderful Raleigh Magnum kept buckling in the potholes and ruts of Cardiff's city centre. I thought the more robust wheels of the Mirage would resist better. They did, but the bike was never as comfortable and I never really liked it.

Pat sold her bike that she had been given by a leaving student some years ago. It was a fine example of a common or garden lady's bike, mixte frame, not too heavy, with 5 derailleur gears. We renewed the brakes and lubricated the gears and all worked well, but she never really liked that bike, either.

So they went. For small sums. Pat's to a neighbour.
Mine to a student who was going to do cycle food deliveries.

I still have a Rudge Bi-Frame full-size folding bike which probably needs new tyres but which is fundamentally good.

Pat decided to have a free loan bike from the city. So she went to the office. 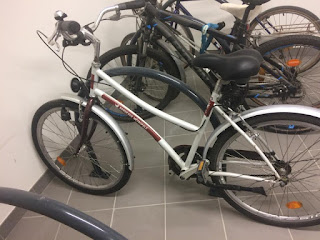 "We need a justificatif de domicile (proof of address), a pièce d'identité (proof of identity) and a rib (bank details). We use the rib if we need to take your deposit."

Proof of address means a utility bill. So she went back the following day with our electricity bill, with her passport and our rib.

We pondered the facts. You are allowed one bike per household on loan for ten months after which you can then borrow a different kind of bike (folding, electric), then after 14 months, that's the end.

So this time I went back with the same justificatif de domicile and rib, but with my passport.

"This is the woman who came yesterday. But she must come in her own name!"

But it's one bike loan per family?

And anyone in the family is allowed to ride it?

Then I shall borrow the bike and my wife will ride it.

Pat had been at the dentist, but she arrived in time to check the dynamo lighting and to get the saddle adjusted.

"We're sorry we made your wife come back again and again."

"Don't worry. It often takes three visits before something works. We're used to it."