So this morning I was up bright and early after a night that was short, hot and sleepless, and I hied me away to get the NEW, BIG car from the station. 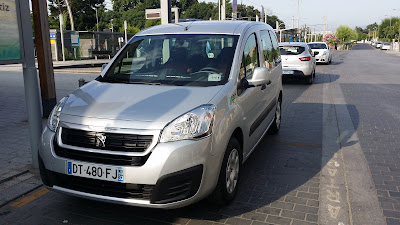 Behind it you can see the new Clio that I was driving yesterday!

It's the same kind of car that we used to have, but a later model, and it was like driving a Transit van. It felt ENORMOUS! But it went OK and the boot sure was big, which meant that with the help of faithful James we got lots of stuff to the dump. 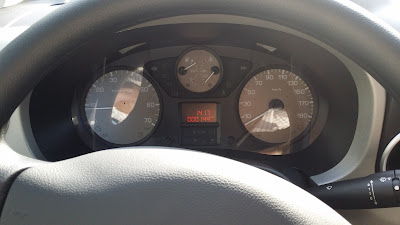 At the dump someone had left a nice looking Raleigh Pioneer bicycle. It needed a brake cable, a good clean and some lubrication, but it was well equipped and looked basically OK. James wasn't interested and if I had come home with a bike to fix Mrs Davey would have been sore vexed, so we left it there hoping someone would adopt it.

Then off to town to meet up with my friend Didier for lunch, during which time I had a phone call from an estate agent. He will come to value the house tomorrow afternoon. OK. Here we go!

Here's the dashboard of the car, showing that it had done fewer than 150 km!

Then back home for siesta and some proper work. Now an early night!
Posted by Alan at 9:05 pm