It's an ill wind that blows no good. That's what they say.

Well, due to covid we are confined to France for another summer. Usually at this time of year we would be well ensconced in dear old Blighty. Just now we would need to pay for government listed PCR tests and quarantine for a minimum of 5 days. Makes a quick trip to see the folk a bit ... inconvenient.

But the upside is that we're in France at the time of the Tour de France. And it was passing within easy striking distance of Bordeaux.

I did a small amount of research. Essentially the choice lay between Cadillac on Friday 16 July, a town a little south of here, and Libourne on Saturday 17th, a little north of here. Both are accessible by train. We opted for Cadillac.

To get to Cadillac you take the train to Cérons - so small it has no bar or café, just a take-away pizza place - and walk across the river bridge. Cadillac is a megapolis in comparison, with numerous restaurants and cafés. We duly crossed the bridge.

One of the restaurants was selling chips (French fries) on its forecourt but when we expressed interest in eating they showed us to a nice table inside and brought us the menu. 14€ got me a salad niçoise, steak and salad followed by a chocolate pud. Mrs Davey had a salad de la mer.

Afterwards we surveyed the scene and chose some steps that led up from the main route to a car park - the steps were blocked at the top so it became our hidden hole where we waited for the "caravane" to come through. After an interminable 20 minutes or so the Skodas started to flow through the town, soon followed by every sort of crazy contraption you could imagine - from sublime gingham painted 2CVs belonging to Cochonou - manufacturers of fine dried sausages - through to a motorised basket of strawberries. All the floats were manned by over-excited young folk singing, yelling and waving and occasionally tossing goodies into the crowd, such as small bags of haribo, Tour de France tee-shirts and hats, bags, packets of seeds, key-rings, small dried sausages and bottles of Vittel water.

These last were handed very skilfully and from our vantage-point we were very successful at securing bottles of water, but not so good at anything else. A bit too close, perhaps. But we also managed to avoid getting too wet when the Vittel wagons rolled by soaking the crowd. It was all good fun.

We then had another wait before the cyclists came. Some people were following the tour on their app and informing everyone or where and when and what.

So we moseyed back to the bridge before deciding it was too exposed to the sun and standing at the side of the road instead. One family had been visibly successful in securing hats and tee-shirts.

The cyclists came by in two waves - first the coureurs - about 20 of them escorted by a flotilla of Skodas and motorcycles. The noise of the bicycle transmissions was other-worldly - a strange whirring noise.

Then about 20 minutes more and the main body came through. Very impressive, though they are past in about a minute and a half.

Some church friends had driven out to Cérons just in time to see the main body pass and they asked if we wanted a lift back to town, so we ended the evening in a burger bar before walking home. 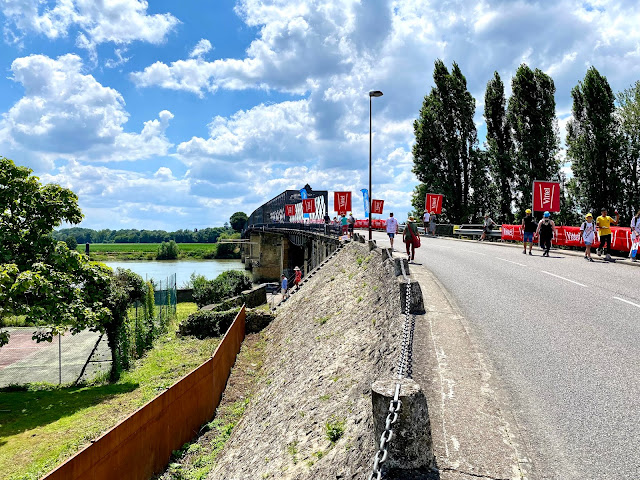 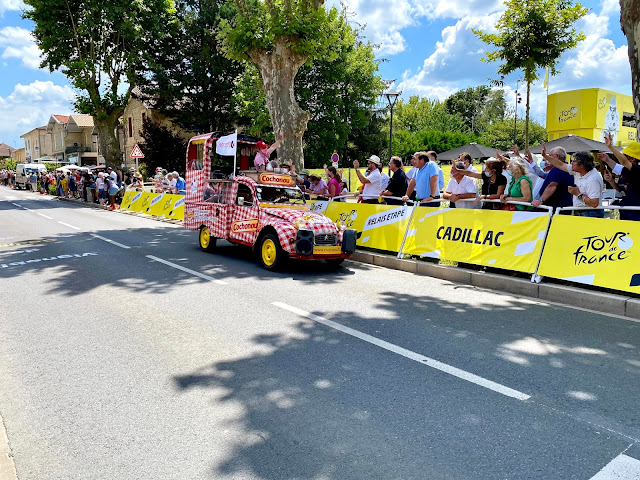 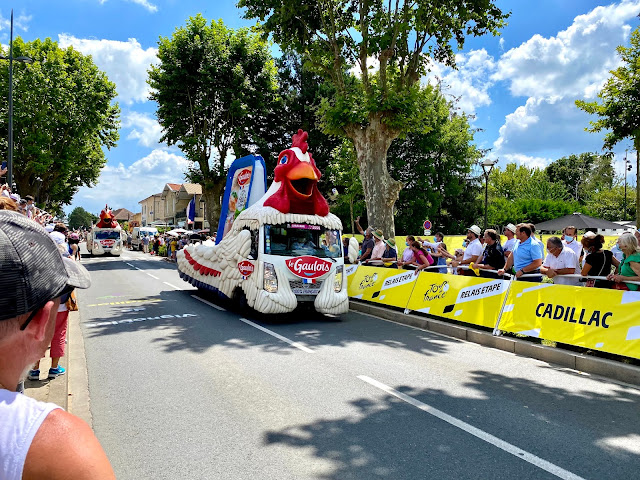 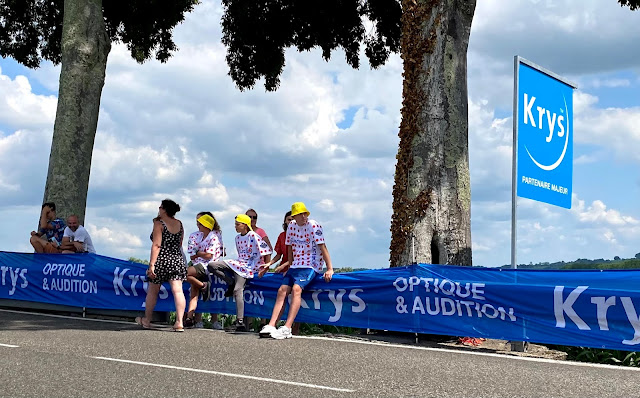