I had a CNEF33 committee meeting this morning, and you know what we boys are like, so I was a little later than usual returning the most excellent Clio to Pessac Centre and hopping on the No. 4 bus.

So it was at 13:10 that Gwilym and I joined the queue outside the brand spanking new Starbucks and waited in the blazing sunshine to enter and order our frappicaramelmacchiatochino.

We chatted with the couple in front of us, visitors from New York, whose daughter collects Starbucks Mugs from All Over the World, and eventually got to the counter. We'd rehearsed our Starbucks names - Gwilym was going to be Rhydderch and I was going to be Llewelyn - but we chickened out big time and became William (I know) and Alan. Which the guy spelt with two "l"s.

We had mangopassionfrappojuicicinos or something. I just said, "Same for me".

And we enjoyed the ambiance of a rather hastily prepared and decorated Starbucks Salon. In places it really showed, but overall it was OK. Comfy chairs. And the team was OK, as they yelled from time to time to each other. Bigwigs were in evidence, discussing stuff and now and again charging round wiping tables. We were also surrounded by photographers, one of whom looked just like the young David Tennant. But unless he really has cracked time travel I guess it was someone who just looked like him.

Basically a good time, though that place is expensive, and all the time I felt so guilty for betraying my faves : Books and Coffee (Sorry lads!), VerdeNero and Les Mots Bleus. 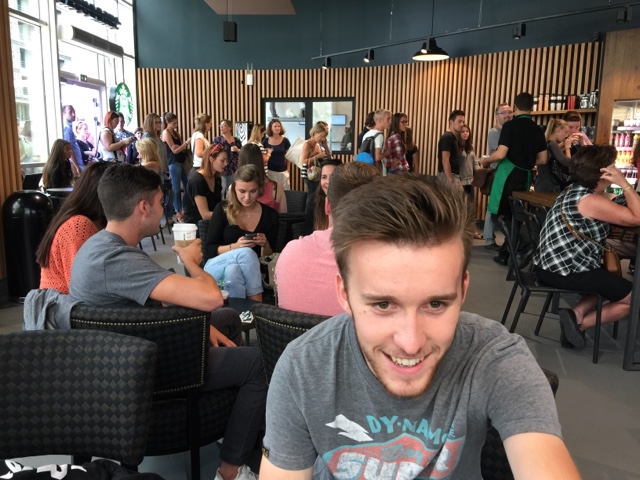 What I find funny is that in Starbucks you have to queue to get your drink, and on top of that you are served and over-expensive drink in a paper cup. OK, the seats are usually more comfortable than your average french café.

Yes, that is funny. You pay more for less good coffee and no service.
And some of the Bordeaux cafés have REALLY NICE armchairs and sofas.
Better than the Mériadeck Starbucks.