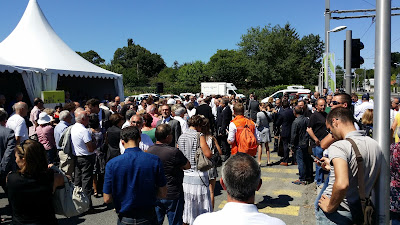 So yesterday morning found us up ladders, down ladders, climbing on worktops, finishing off the painting of the kitchen. Then, at 11:30, we set off for the inauguration of the tram to Pessac Alouette. 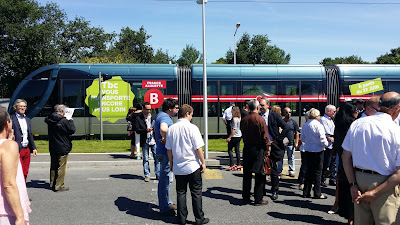 We took the 4 to Pessac Centre, then walked down the lovely wooded walkway to Bougnard. Some event tents had been set up and a little crowd was milling. A small jazz group played New Orleans style. A man was carrying a velvet cushion and a golden scissors. The press and the radio were there.

M. Raynal, the Maire of Pessac gave the first speech, followed by the Chairman of the Hospital Group of Haut-Leveque, then M. Juppé, Maire of Bordeaux, Chairman of Bordeaux Métropole, Future Candidate of the Républicains and Future Président of France. 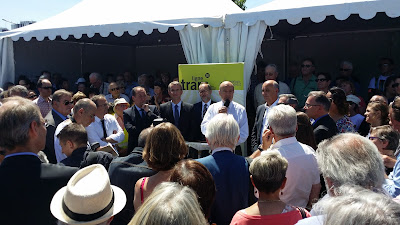 After the speeches M. Juppé cut a ceremonial ribbon with the golden scissors, and cut pieces of ribbon for the little girl who served as scissor-bearer, then we surged into the waiting tram (which, incidentally, was not at a tram stop). A wooden ramp had been set up for wheelchair users. 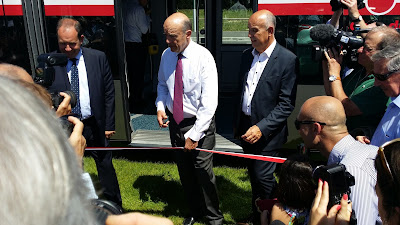 The tram set off and took us, non-stop, to France-Alouette where some more event tents were waiting with fruit juices, fizzy water, delicious sandwiches and little wedges of tortilla española. The sandwiches had alarming colours - some were the colour of Oreo cookies and some were orange, but they were all very good indeed.

At my left was stood a man from Radio France. He caught my attention and interviewed me about the arrival of the tram. Then I spotted the Maire of Pessac, M. Raynal. I asked him if we could please have some Citiz cars posted here. He seems to be more in favour of Bluecub - little electric cars. Maybe they would do...

Later that afternoon we went for a celebration trip by air-conditioned tram into town and ate ice-cream in Macdonalds.