My life is sometimes so varied

The day started with sermon prep with our preacher for Sunday, who is tackling Daniel 9. We had a great time discussing the passage. Our discussion was interrupted a couple of times by messages from Pat and by a phone call.

The phone call was from our insurance company who have decided they don't want to insure us in the future citing "frequency of claims". I phoned yesterday for clarification but the woman who took the decision was not in her office and the guy I got on the phone wasn't able to help. "I can't see all your dossier but I can see at least three claims in fourteen years." In 2009 for the big storm, in 2015 for a water leak and in 2017 for the burglary. The "at least" in his sentence was superfluous. There have been three. Exactly three. No more and no less. Anyway the call came and the woman's definition of frequency was indeed that. "From two you can speak of frequency", she said, "and the real problem was your burglary last year". I resisted the temptation to say that now her definition of frequency was reduced to one, asking instead for a list of our claims so that we can show it to other insurers. "We can"t do that", she said, "but you can on your client section of the website." Well if you can I can't find it.

Coincidentally we had already decided to change insurers and discussed this with another office in February. You don't think she knew, do you?

Not entirely unrelated, Pat was at the dentist receiving bad news of three extractions, a refixing of a crown and some implants to come. The thing is, our old insurers have a list of approved dentists and opticians - it's why I buy my glasses online and maybe why Pat's old dentist had said he was leaving a bad tooth in her mouth "to support the other teeth". The new dentist raised his eyebrows.

Pat was a little upset in the dentist chair thinking of the next weeks and months, and the expense. We have the money, though, I think, and anyway you can pay in instalments. Implants will almost certainly not be covered by our existing insurance and anyway, this new dentist is not part of their network. Maybe changing insurers is not such a bad idea after all.

In the evening it was the Fête de la Musique, and Catrin was singing at Ambarès-et-Lagrave. We'd booked a car from Talence so I met Pat who had spent the afternoon at the Maison de la Bible volunteering and being consoled with chocolate, of all things, and our friend Frances, and we scuttled off together. The GPS took us on the scenic route to the rocade, wasting perhaps 1/2 hour. When we arrived we quickly found a spot to park then set off to try to find the square where it was all happening. Frances is a Maths doctorand and generally very clever indeed, but we all had doubts about Google maps and joyfully trudged three sides of a square under the blazing heat before arriving about 30 yards from where we started. We enjoyed seeing the trees of Ambarès snuggled up in their knitted cosies. A Citroën 2CV had received the same treatment, as had most of the town's innumerable bollards, innumerable even for Frances. I think this might be the oddest thing I've seen in France.

Ambarès is at the confluence of the Dordogne and the Garonne and is a place of many stagnant pools and rampant mosquitoes. Catrin and her classmates were singing in a kind of rustic garage setup with a nice, intimate stage and rustling birch trees to one side. There were three stages in the town, two in the open air and this more intimate one, but only one group played at any given time, people being encouraged to flow from stage to stage. So there was a decent crowd for our girls. We missed Bérénice's prestation but were there for most of Chloë's and all of Catrin's.

Then we packed up quickly and found our own way back to Talence to park the car and get the tram to Pessac. Rendez-vous for the choir was at the church at 10pm, but at 10:06 we were still waiting for the tram. It came. We got on. It was packed. They all got out at Doyen Brus where there was a discothèque set up under the trees. We carried on to Pessac and arrived to find our choir just assembling itself on stage. We sidled in inconspicuously, though if I had known we would be sidling I might not have chosen my  beautiful "spring flowers" shirt, and given the time it took to set up the dreadful piano, we could have taken our time anyway.

Our rendition of popular classics was not an utter catastrophe and we left the stage feeling pretty happy. Biggest accolades to the pianist who coped with the lamentable piano and who repeated the same bar seamlessly until the conductor remembered to launch the sopranos into the next section of the Bizet.

Meanwhile, poor Gwilym. A cheque I wrote him from our British bank account bounced. I'm surprised but not shocked. It was a relatively big cheque and the money was in the account when I wrote it, but maybe it wasn't by the time he received it and cashed it. Or maybe the date was wrong, or maybe the bank just panicked at a big cheque... The problem is compounded by the fact that our statements take several weeks to arrive and we cannot interrogate our account online from France. Oh well, we'll get the money to him from our French account somehow. 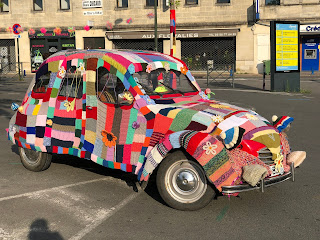 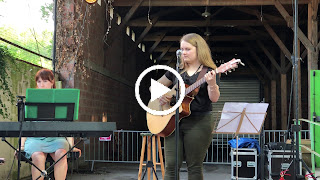 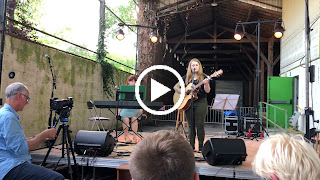 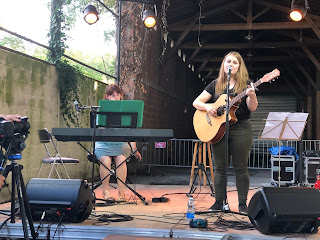 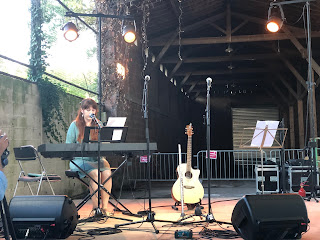 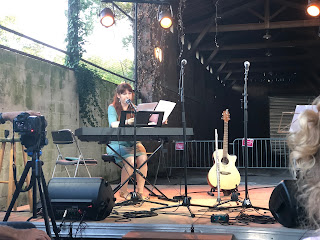 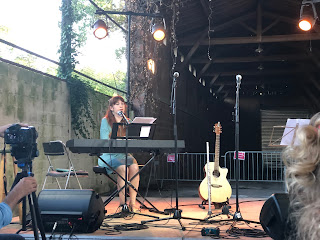 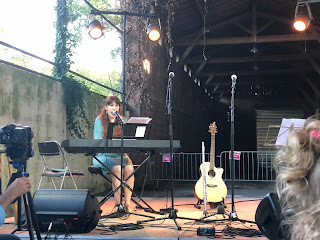 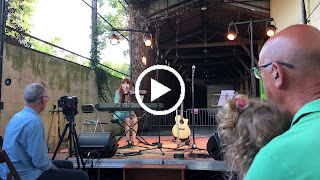 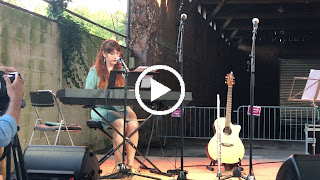 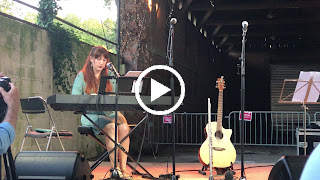