Last night the choir took part in a charity concert at the church in Pessac. 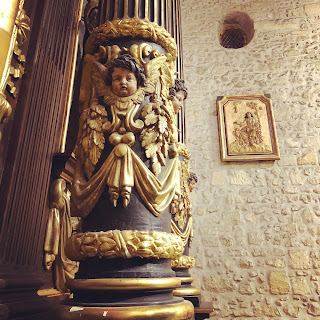 It was a bitterly cold night. We were assured the heating was on. So were our coats.

After a brief warm-up and some jiggery-pokery with the small, inadequate electric piano we sat down for the speeches. There are always speeches.

Then we were off. Our programme included the choral movements of BWV4 - Christ lag in Todesbanden, as well as the last movement of the Vasks mass and Fauré's incredibly popular Cantique de Jean Racine.

There was a brief moment in this movement where I was aware that the tenors on my left and the sopranos on my right were not in synch. It felt like being in a skidding car. We were slewing off. What do you do? I stuck to the conductor like a limpet and after just a couple of bars we were all back together again. I guess everyone had done the same.

People applauded the Fauré on its announcement as well as on its conclusion. I, however, sight-sang it last week and then learnt it on the train home from Paris!