So I got my copies and found a friendly bass and found we were singing two pieces: the Pergolesi Magnificat and Cantata no. 4 Christ lag in Todesbanden. I've loved both pieces ever since, but especially the Bach.

A couple months ago I decided to join a choir. There's one that rehearses a 10 minute bus ride or 30 minute walk from us, at the Alouette school of music. I emailed them. You don't have to audition. They rehearse on a Wednesday, an evening that suits me. I went along. 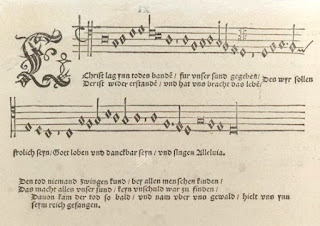 I got my copies and saw that we're doing two pieces, the Vasks Mass and Cantata no. 4 Christ lag in Todesbanden. "What voice are you singing?" "For this I'll sing bass. I sang it forty years ago and I still have a vague memory of how it goes."

"Christ lag in Todesbanden" is a hymn written by Martin Luther, both the text and the tune, though based on earlier material. The text recounts the gospel story very simply. Because it's difficult to translate poetry it isn't easy to find a version in English that sticks to the meaning of what Luther wrote, and I have almost no German, so I can't translate it. But I can tell when someone has made a total hash of it! Here's a translation that I think captures the meaning: 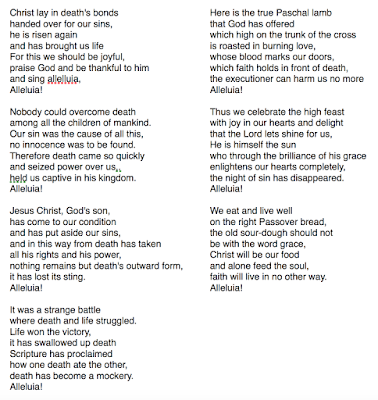 Luther's hymn was published in 1524. Bach's cantata in 1707. It isn't easy for a movement to keep its vitality for 200 years, and sure enough, the lovely earthy energy of early Lutheranism soon fossilised into just another religious system. But in the late 1600s a movement called Pietism was born through the work of Philipp Spener, who emphasised personal conversion and renewal within the structures of the Lutheran church. Bach seems to have been influenced by this renewal.

His cantata is scored for four part choir, strings, cornetto and trombones, the brass doubling the voices. It starts with a short sinfonia just for the strings which is a kind of variation on part of the hymn tune.

Then follow seven movements, one for each verse. The writing is polyphonic and in each movement Luther's melody is the raw material that Bach uses. Three movements, verses 1, 4 and 7, are for full choir, and they are not at all easy to sing. Even though Bach was only in his twenties when he wrote the cantata, he had lots of inventive skill and the music suits the text really well.

Performances vary in the size of choir used. At Aberystwyth I think we were no more than thirty. At Pessac we're between 40 and 50. Some recordings use just the soloist's voices. At Aber and in Pessac we have no soloists, and the tenors will sing the tenor verse together, the basses singing the bass verse.

I'm both touched and thankful to be singing the Bach again. Meanwhile the Vasks Mass is written by a Latvian Baptist pastor's son, Pēteris Vasks, who had to study in neighbouring Lithuania, apparently, because of persecution against Baptists in his home country. It's good to discover a composer new to me.