One of the downsides of our flat is that quite a lot of the fixtures and fittings are not of the best quality. The windows are fine, thankfully, but I'll be surprised if the sink unit lasts 10 years. It's the cheapest tat you find in the least prestigious diy shops, and was installed with the corresponding level of care. So our Heath Robinson system of outpipes under the sink is leaking a little. I took off the trap and cleaned it out and put it back and screwed it as tight as possible, but the leak isn't coming from the trap. It's coming from some of the other joints.

One good way of making these joints good is to use a little PTFE tape. It actually helps you screw the fittings together, but it also fills the threads and stops leaks. It's great. But the hardware stores were closed during confinement. Then they opened the out of town ones. Ha! They're no good to townies like us! But now the ones in town are open.

I went in to one of my favourites. They made me have a little trolley so they could count the people in store, checked I had my mask on and had gelled my hands. I happily gazed at the bits and bobs, thinking of all the great things I could do if I had half an idea. I found the plumbing area and a pleasant chap came shooting up to help. 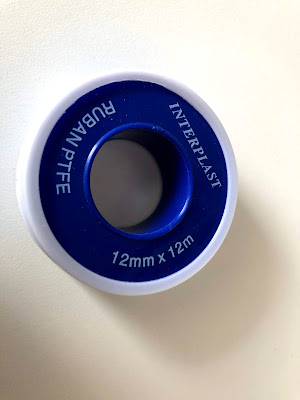