Today we are on orange alert for canicule. A heatwave (vague de chaleur) is as vague as its name implies. It just means it's hot. A canicule, however, is much more serious, implying that the temperature at night doesn't fall below around 20°C. The problem is that if the nights are cool your body can get some refreshment while you sleep. Also the walls of your home can radiate heat to the outside air, allowing the building itself to cool down. If the nights are too hot then the heat just continues to build up and the daytime heat has a greater effect on your health.

Obviously it is important to drink lots of water. Also shopping centres and our local library are air-conditioned, so you can always nip out to get cooled off! 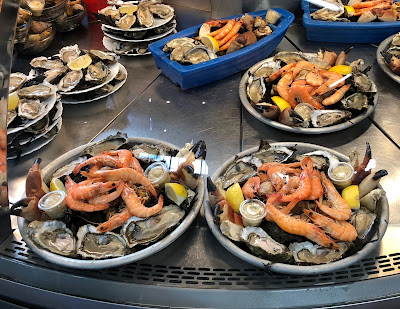 On a happier note, after 13 years living in Bordeaux at last we visited the Marché des Capucins, Bordeaux' most important covered market. Here's a picture of some plates of seafood, looking almost good enough to eat.