"Orange alert for storms in New Aquitaine", they said.

"Yeah, right", but I still decided to look for my black waterproof - unsuccessfully.
How do we manage to still lose things in such a small flat?

Anyway, I pulled on my cotton jacket and rushed out. It was just starting to rain. The number 42 bus came as the thunder started.

We reached the tram top at Merignac, and now it was raining very hard indeed. I ran across the road to the tram stop and was drenched. Thankfully there are shelters, though it was too late by anyone's reckoning.

The tram arrived and we rushed on. We went through perhaps four stops before we were told that we'd be held up for a while because of the rain. After about 10 minutes we started going again through roads perhaps a foot deep in water, with cars inching through.

At Mériadeck we were told that that was it, the rest we'd have to do by foot. I wanted to pop into H&M but found that the Mériadeck branch has closed. Flunch, the cheap self-service restaurant, has also closed in the same centre. Across the road the Passages de Mériadeck are almost all empty.

Meanwhile some of the other shops were having trouble because water was pouring in from higher up in the building. I left and started off to the Maison de la Bible through streets where hailstones lay in piles and shopkeepers were brushing water from their shops.

It started raining again. I had my bad shoes on, so I had to walk gingerly. Bordeaux was paved by a sociopath who designed paving that becomes extremely slippery when wet. They did that for the town that is colloquially known as the "chamber pot of France" because it rains so much. I imagine them laughing every time the weather forecast is bad and thinking of their horrible revenge on the Bordelais, slipping and sliding and falling to their doom on the smooth, shine streets.

At last I made it to the bookshop and towelled myself dry. The storm lasted 10 minutes. The damage done to the vines further north is severe and some families have had to be rehoused after the ceilings in their apartment blocks all gave way. Nobody was injured or killed but the firemen were called out over 300 times. Some storm, eh! 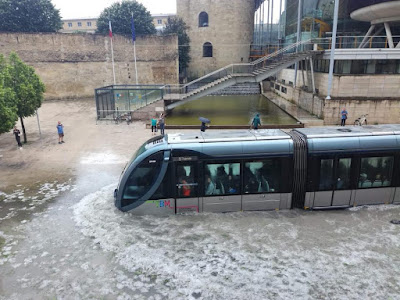