The inauguration of the Chinese Church

Yesterday we were so very privileged to be present for the inauguration of the Chinese Church, which took place at the Eglise Evangélique Libre in Pessac, about a 1/2 hour walk from our home. It's a rainy weekend, so we travelled indolently, by 42 and 44 bus, walking just a couple of yards either end of the journey.

They say that when you are drowning your whole life flashes past you. Well we were drowning in a happy sea of thankfulness as all our life in France flashed before our eyes.

We saw way back 15 years ago, before we arrived when two Chinese girls started meeting for Bible Study. Soon afterwards they were joined by a lad who became a friend of ours, and who later married one of the girls. Slowly the group grew. Our involvement with the group grew, too, until 2014 when we focused on the International Church Plant. Incidentally, it was thanks to a gift from the Chinese Group that I bought my first Apple computer.

Friends were there who we have not seen for years. There were huge hugs, lots of stories, a few tears and a lot of applause. Then a good Chinese meal. "Never ask what's in it", joked one of the Chinese pastors.

We came home pretty stoked up. 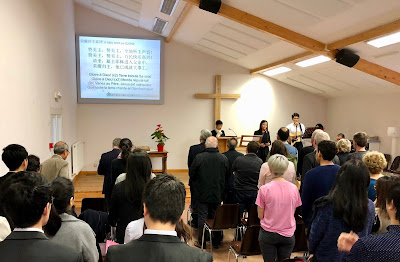