Yesterday we celebrated four years of Bordeaux Church in the centre of the city with a day conference, a nice lunch and an evening barbecue. The speaker was big Guillaume Bourin from Paris who I first got to know some years ago when Gwilym went on a week in Belgium with him.

The day went well, and then came the time to come home. We cleaned up and left for Pessac in luxury in Rita's Fiat Panda. No bus 4 for us that night! In fact, no bus 4 for anyone, because of the Bordeaux Marathon which was being run along a substantial part of the bus' route.

So we set off for home, guided by Rita's GPS in her phone. Pretty soon we arrived at the end of a street where we could not proceed because of the marathon runner. Some drivers hooted, others shouted, one got very rude, apparently, when told to reverse. "Does your sister reverse?" he said.

Anyway no-one could go forwards so eventually even the most recalcitrant accepted the inevitability of regress and we careered blindly backwards down the road whence we had come. After a certain time I decided that there might be a better GPS programme for these circumstances, so I started up Waze, which knows about blocked roads and traffic jams. "You are 5 minutes from home and it will take you 27 minutes", it said.

A lively discussion ensued, wherein we eventually concluded that we should follow its directions. Follow, that is, until I realised that the programme was making gallant efforts to achieve the impossible. It could get us to within 1/2 mile of our house, but no closer because the marathon runners formed an impenetrable barrier to wheeled vehicles.

We persuaded Rita to drop us at the most beautiful roundabout, from whence we proceeded on foot without incident in the opposite direction to the marathon runners, shouting helpful encouragement, "Bravo!", "Jusqu'au bout!", and "Plus vite que ça!"

Rita, meanwhile, was staying with friends at Saige, and from the most beautiful roundabout to Saige it was an easy and clear road. 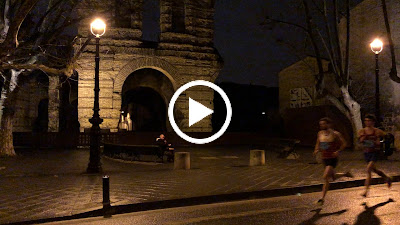 When are you planning to run the Bordeaux Marathon?