When I popped into Pessac centre to get the cinema tickets I also went to get an address at the town hall. I had a serious letter to write.

The junction just outside our block of flats is an accident blackspot. I know of four accidents in the year that we have been here, but people whose flats overlook the road say there have been many more, perhaps 20. The problem is that just before the flats the road curves to the left and the road markings get very slippery in the rain. So if drivers are not very precise in their steering and allow a wheel to sidle onto the line then the car will be liable to skid. 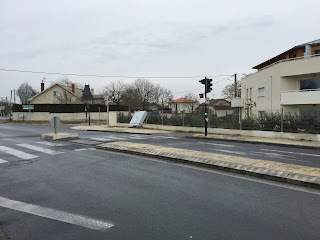 The last accident was on Christmas Eve when a Peugeot 308 skidded across the pedestrian crossing, mounted the kerb and smashed into the fibre-optic internet installation, smashing the fence behind it (and the front of the car).

Anyway, I was ushered in to talk to someone in the public spaces department, explained what is happening and later followed it up with an email and the photo of the aftermath of the last accident. "If someone is mown down by a car I could not forgive myself if I had not alerted the authorities",  I wrote, perhaps just a trifle melodramatically.
Posted by Alan at 3:46 pm