The theme for the Colloque this year was "The loss and recovery of joy in Christian ministry". It wasn't the theme that attracted me to Lyon, but the opportunity to catch up with friends from all over the francophonie, and to make new friends, of course.

I travelled there and back by coach, by Starshipper. It's the same company that took us to San Sebastian the other month. I looked first at the train - it takes a very long time indeed and costs a fortune. I considered flying - Easyjet go there but the plane leaves at 7:30 in the morning and there's no practical way to get to the airport for 6:30, so it was the coach.

The coach has its advantages. You have space. You can read, listen to music, doze, watch the scenery. We passed through the region of the volcanoes where there was still snow on the ground, calling at Périgueux, Brive, a motorway services where there was a Flunch where we could eat, Clermont-Ferrand, where the trams are some dark colour I can't distinguish - maroon, perhaps? - then into the sprawling stain of city that is Lyon. It's ENORMOUS.

To get from the coach-station (and because France has only just discovered long-distance coach services the coach stations are dreadful) I had to take two lines of métro then a bus to climb one of the hills that surround Lyon up to our Monastery turned Diocesan Conference Centre turned Hotel. My room was very nice, but for the first time in a very long time I thought, "home is nicer".

The colloque speakers included Iain Hamilton who was bravely translated by Emmanuel Durand, Gordon Margery and Olivier Favre. I wouldn't like to translate Iain. He doesn't use a simple word where a complicated one would do, and at one point Emmanuel said, "Oh no, no Latin please!" which must have been quite a magna angustia for Iain. 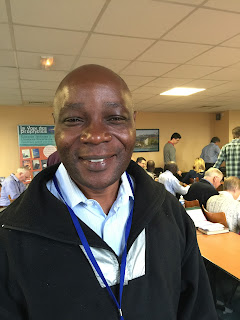 It was a huge blessing to see Emmanuel and Anatole, who came to Deeside on stage in 2000 - 2001. I reminded them of Emmanuel's wedding where Anatole had the job of interpreting the proceedings into French and I had the job of trying to make Anatole laugh. Happy days!

I'm always very impressed by the students from the IBB who come. One this year is a Durham graduate in French and Arabic who aims to stay in Brussels and work once his studies are complete. I met a lady who encouraged Pat and I to continue running - she's been running a year and now routinely runs for an hour after work to shed the stress of her job. She says that running for an hour is MUCH better than running for 30 minutes, and that after a year you really see benefits in your well-being. We'll see. 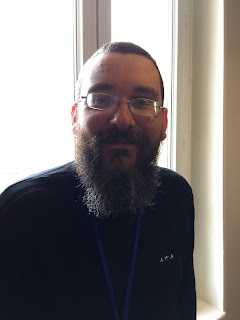 On the journey back we had an adorable bus-driver who elected herself everyone's aunt and made sure we had a very pleasant journey. I ate chicken, green beans and a really nice ratatouille at the Flunch and enjoyed listening to music and reading as the sun set. Then home where my armchair and good tea awaited me.
Posted by Alan at 8:46 am