Today the new "Excuse my French Café" was advertising a brunch at 8,50€, so I suggested an adventure to Mrs Davey and at about 12:30 we set off.

Tram B is now repaired and all is well, so we hopped on the tram to take us to the Musée d'Aquitaine where we'd walk down Cours Victor Hugo to the street where the café is situated.

At Peixotto we were told that the tram in front had broken down. The helpful public transport app on my phone said that to get were we wanted to go we could either take tram B or walk for an hour. So we started to walk.

Two stops later along came the tram, so on we hopped - or rather on we squeezed. We were many, and packed in tight. We didn't fall down but at every stop as the doors opened we popped out and had to press ourselves back in. It was good to arrive at Cours Victor Hugo.

Well the café was charming, run by an Anglo-French couple, brunch consisted of scrambled eggs with feta cheese and red peppers, porage with nuts and raisins, and strawberries and cherries to finish up, all served with a nice big pot of Earl Grey tea and lots of good humour. 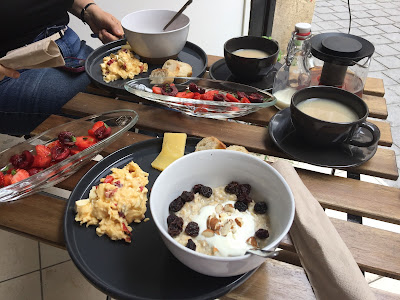 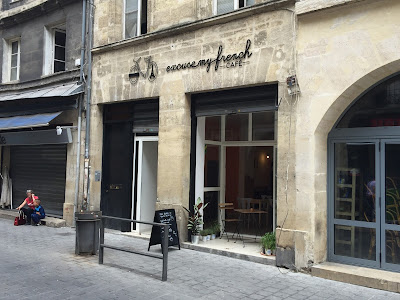 We sat in the window and watched the world go by. The café is in the street that leads down to the Place Saint Michel, and on Saturday mornings there's a huge market, mostly run by North Africans. You can by Moroccan mint, coriander and parsley in huge bunches, freshly picked that morning in the herb fields of the Atlas Mountains.  You can buy a live chicken and have it dispatched and prepared while you watch or take it home trussed up and sort it out yourself.

Then off home to cut the grass and finish preparing for tomorrow.
Posted by Alan at 6:19 pm