We decided to go on a free walking tour of Bordeaux from 11 till 1 on Saturday. Run by a group that advertises on Facebook, it promised the story of how Bordeaux became three times the capital of France.

The rendez-vous point was at the base of the cathedral bell tower, and we arrived there about 25 minutes too early. Just the right amount of time for a quick 1€ espresso at the café Cheverus. 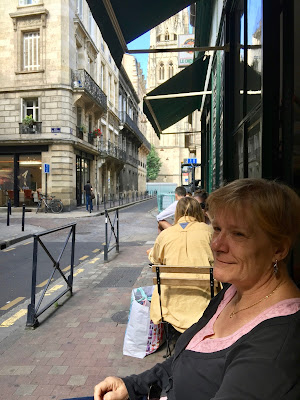 The tour was conducted by a charming guide called Hubert who alternated between French and English as we were five tour members, two French, two Brits and a Canadian.

The Hotel de la Préfecture where the government was housed during the First World War.

The Grand Théâtre, seat of government during the first few days of the Second World War.

The Girondin Monument, sold to the German occupying forces to be melted down for munitions during the closing stages of the Second World War, but which never made it out of France and was brought back to Bordeaux and re-erected during the 1980s.

The Place des Quinconces, which hides a substantial German bunker.

The site of the Portuguese consulate where we heard the story of Aristide de Sousa Mendes, who illegally issued 30 000 visas to whoever applied and so saved thousands of lives, including 10 000 Jews. Condemned by Salazar, he died in penury. Also of the Frankton raid by British commandos, who paddled up the Gironde in collapsible canoes to mine ships in the port of Bordeaux. And of the German commandant tasked with blowing up the waterfront but who instead ignited the explosives in their bunker to save the city. And the submarine base which brought supplies from Japan.