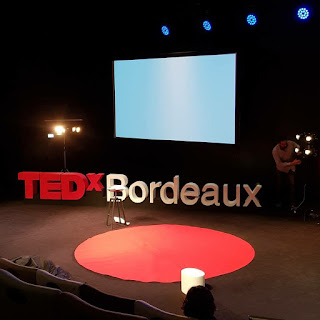 Ted talks are coming to Bordeaux this weekend, from 2pm at the Cité du Vin. I applied for a ticket and my name was pulled from the hat! The theme is "Qu'est-ce que tu crois?" (what do you believe) so it will be fascinating to see how the theme is addressed.

At the same time it is the weekend of the Bordeaux Lutherfest, much reduced from how I imagined it, there is a cluster of municipal festival tents around the corner of the Cathedral. The Maison de la Bible will be there, along with the Gideons. We had planned to share a stand, but instead we have been separated from each other and placed with other groups - us with the Adventist Youth and someone else, the Gideons with other folk. We were surprised to see two other bookshops present - a stand from the publisher Olivetan and a bookshop from Toulouse. Both have links with the Eglise Protestante Unie de France, the historic protestant church.

The LutherFest will be celebrating Protestant social action.

On the Maison de la Bible stand there will be a loop of the Playmobil Luther film with French subtitles. There'll also be a small model printing press and Gutenberg-style Bible verses to frame and display. There'll also be our friend, Myriam, the story-teller, telling the story fo Mary Jones and her Bible, as well as books at various levels telling the story of Luther and his rediscovery of the way of salvation.

I had tickets for a recital of Bach Cello works but it clashed with our Bible Study so I gave them to someone else.

There was also an excellent choral concert yesterday evening, but I had to give that a miss, too.

I have tickets for a lecture advertised as being on "Luther - adventurer of the faith", but the title has been changed to "The Protestants 500 years on." which doesn't interest me at all.

I have tickets for a theological debate on Sunday afternoon. We'll see if I get to that!

It's one of those weekends where lots of things are happening all at the same time.