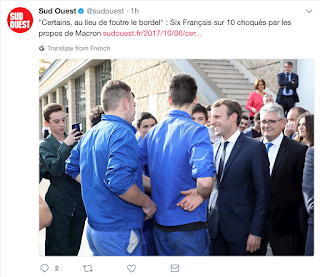 President Macron came to power saying that he wanted to restore the prestige of the presidential office after the last two rather unprestigious presidents, little president Sarkozy with his potty-mouth and his actress-singer consort and again little president Hollande with his nocturnal liaisons by scooter.

A jupiterian president, with dignity and class befitting his power. His elegant wife won Trump's approval for her physical condition ("just beautiful") and there's no doubt that she is a great support to him.

But he does have a rather earthy turn of phrase sometimes.

Instead of the expression he used, shown in the tweet from the Sud-Ouest, he could have said "semer la pagaille" or any one of a number of less ... pungent things.

And lest we think it is a problem of vocabulary, let us remember that President Macron is married to a French teacher. We can safely conclude that if anyone has ever come close to mastering the language of Molière - vain hope - at least he has flown nearer to that sun than most of us.

Why this seeming incoherence between his desire to restore a seemly presidency and his somewhat direct manner of speaking? I think there's a couple of reasons.

Firstly, and I know I risk sounding like a boring old duffer if I say this, but our politicians are generally a rather uninspiring lot at the moment, aren't they. I rather like Macron, but he wouldn't have to do a lot to stand out from the crowd! This is what things are like in our western democracies at the moment. We don't have a lot of presidential people, despite our strong culture of leadership. I am tempted to say because of our strong culture of leadership, but that's another story.

Secondly, there is a genuine difference between British and French culture when it comes to ... polite speech. In fact I still remember how shocked I was in about 1980 to hear a very polite Londoner say that runners looked "knackered". This was not a word we used amongst strangers in South Wales. Americans use words that British people consider impolite, vulgar or just plumb rude and in French many coarse words are used by ordinary people every day.

I can't imagine that Theresa May came off stage after her historic speech at the Tory Conference Party and used the kind of language to her husband in private in a furious outburst that Macron used calmly on microphone at the factory. She probably just doesn't ever speak like that.

Macron does. As one of the teachers at our language school once said, "Les gros mots, je les réserve pour les grandes occasions!" I keep naughty words for high days and holidays.