On the death of Jean d'Ormesson and of Johnny Halliday

Yesterday we heard that Jean d'Ormesson had died. He was a well-born Frenchman (hence the d'). His full name was Jean Bruno Wladimir François de Paule Le Fèvre d'Ormesson. He became an author, the editor of the Figaro for a few years and was the longest-serving member of the Académie Française.

I got used to seeing him interviewed on the television and noticed him because he spoke openly, freely and warmly of his belief in God. He was a real charmer, always smiling, always witty. They said of him that he loved life, loved women and never took himself seriously. He himself said that as a young man he loved to have a girlfriend but what women loved most about him was breaking up with him, so he lurched from one broken heart to another.

He had a major row with his father, who saw him as a worthless lout, and it remained so painful that he couldn't speak about it even as an elderly man.

I have no idea really of the content of his faith, but I liked the tone of what he said about God. 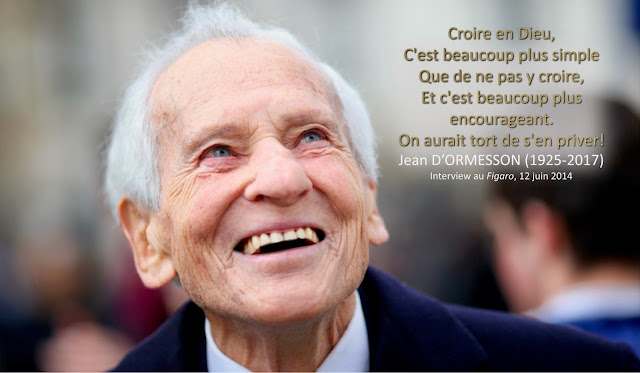 Believing in God is so much simpler than not believing in him, and it's much more encouraging. You'd be wrong to deprive yourself!

And again, from another legend, Bernard Pivot:

"If God exists, what would you like to hear from him after your death?"
"Come in, poor fool" answered Jean d'Ormesson.