Catrin's wedding was timed for the middle weekend of the Toussaint half-term fortnight, so the following Monday we took a flight to Porto. We had EasyJet vouchers from cancelled lights during confinement that needed to be used up before January. In December we plan to visit our son and daughter-in-law in Norwich, but easyJet doesn't fly anywhere convenient from Bordeaux for that. We're itching to return to Italy, but there were no flights. No flights to Bristol or Liverpool, so no visits to the UK. But Porto was possible, so Porto it was.

The city is fascinating, we managed to do most of what we wanted to do and the only hiccough was that after going through security on the way back we found our flight was cancelled. Some moments of headless chicken impressions got us up to the easyJet check-in desk where they sorted us out with accommodation.

Some years ago we were in a similar situation with Swissair, and felt so badly treated that I really don't want to fly with them ever again.

This time we were given a good hotel room, a flight home at a reasonable time the evening of the following day, taken by bus to our hotel and promised that it would pick us up mid-afternoon for the flight, and provided with a very good evening meal and with a super buffet breakfast. For some reason lunch was not included, so we went to a local supermarket and bought a picnic which we ate in the hotel foyer.  Eu rules stipulate a level of compensation for a delayed flight, but a fellow-traveller told us that it is unlikely that we will receive it - EasyJet will argue exclusion clauses. We'll see.

Some highlights of Porto included the river quays, the bridges, the cafés and restaurants, the friendly people, the food which is good and inexpensive, though perhaps a little hearty. One restaurant owner was particularly friendly and had long conversations with us, telling us where to go to eat the local delicacy, the francesinha.

The francesinha belongs to that family of foods that includes the toasted cheese sandwich, the caws pobi of Wales, the croque monsieur of the whole of France, and the "Welsh" of northern France. The story goes that a man of Porto visited France and enjoyed his croque monsieur, but felt that something more hearty was needed for the people of his home town. So he invented the francesinha. It comprises, from bottom to top :

a thick slice of bread

a slice of mortadella sausage

a slice of brisket

another thick slice of bread - the whole toasted.

Then, atop that, a fried egg, sunny side up

covering the whole edifice, slices of cheese, I forget which kind.

Then slathered over the lot is a hot, cheesy, spicy, boozy sauce. The heat of the sauce melts the cheese.

It is served on a large plate, surrounded by chipped potatoes.

No vegetables were involved in the preparation of this dish.

We were directed to the Café Santiago to sample this delicacy, though Patricia chickened out at last minute and opted for fish and rice. 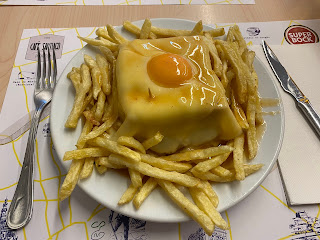 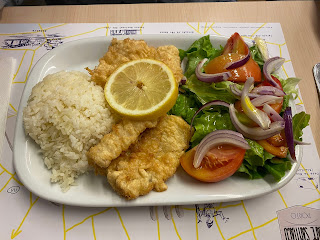