A marriage at the town hall

It's been so grey and gloomy today that I have ben obsessively putting all the lights on. It didn't actually rain until just before we were due to leave the flat, so we took our new Lidl umbrellas (those swanky ones that kind of open inside out) and headed off to our neighbour's wedding.

Pat got to know our neighbour over the last year. She's a woman with three small lively lads and just before Christmas she told us she was getting remarried. We met her fiancé who seems a nice guy, and they invited us to the wedding.

So off we went on the tram through the rain to the town hall. We had the time slightly wrong and arrived early, but we weren't the only ones, so we hung around under the portico trying to stop the kids from getting too messy and waiting for the wedding.

Two clerks were looking after the wedding parties, and they came over to check which party we were with and herded us into the wedding room, then fussed for a while until the happy couple arrived.

The wedding at the town hall is pretty good. They read the relevant clauses from the French marriage laws, detailing the duties and responsibilities of the couple towards each other and towards any children. At this point the boys said "it's us, the children!"

Afterwards there comes the "consentement", the moment when the mayor or his deputy says "Will you, Fred Bloggs born on such a date in such a place, take Elsie Higginbotham here present to be your spouse". The reply has to be "Yes".

From this comes the expression "ils se sont dit oui", they said yes to each other, which is an informal way of saying someone got married.

Then there's signing of the "Act of Marriage", optional exchange of rings and presentation of the pen that was used to sign the marriage act.

Then the clerks started to worry about getting us all out again in time for the next wedding to come in.

While we were waiting to go in for the wedding the police were mustering outside ready for the next demonstration of the gilets jaunes. 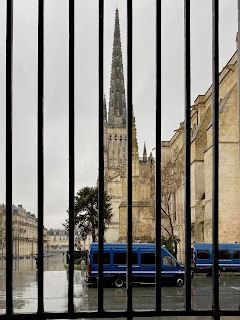 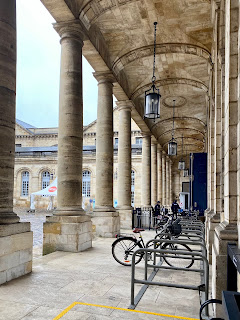 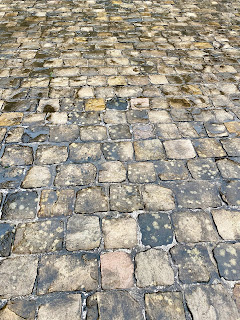