So this morning we dispersed, we Daveys...

Pat and Catrin hied them to the Eglise Libre de Pessac, taking the No. 44 all the way.

Gwilym was off to Lormont, while I directed my steps to the centre of town and the Temple du Hâ. 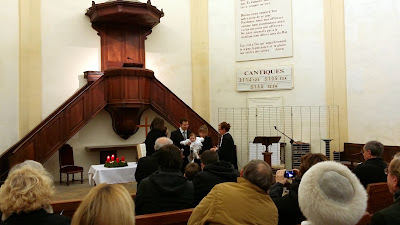 The Temple du Hâ is right in the middle of Bordeaux near the cathedral and is part of the United Protestant Church of France, recently formed from the merger of the Reformed Church and the Lutherans. 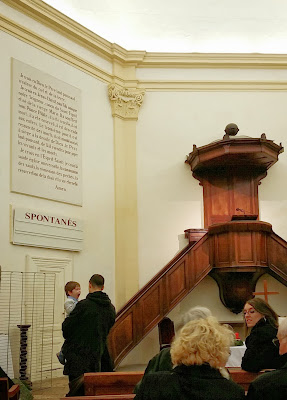 I was surprised to be greeted by my music friend, Seb, who I didn't recognize in different surroundings and clothed in a natty suit. "You're protestant ?" He explained that his better half is protestant and that they were there to get their daughter baptized.

I haven't seen Seb for a couple of months at least, so it was great to catch up with him.

The service was interesting - conducted quite quickly with usually no announcement of hymns and canticles - the organ would launch off and you jolly well kept up. Or not, as the case may be. We didn't sing a psalm, which I was a bit disappointed about. I'd rather like to learn a few more of the nice French psalms with their jerky, jaunty, irregular rhythms that caused them to be nicknamed "Geneva jigs". 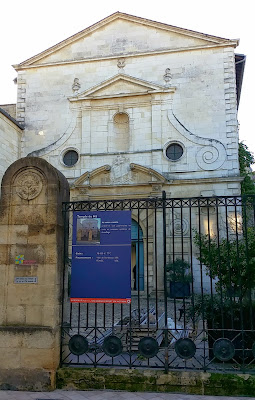 The sermon was on Isaiah 62, watchmen on the walls of Jerusalem, and how we should be watchmen, and the preacher had the fastest delivery I ever remember hearing. After she finished I thought "Phew!".

The city was beautiful this morning, cold and sunny. Very cold.