Our Ukrainian friends had car trouble in Germany and the repairs required a part to be ordered, so instead of arriving on Wednesday evening they arrived on Friday. Not only that, but nine people had swelled to seventeen.

This changed our plans. We had imagined accommodating them in church members’ homes but on Saturday two of our folk were having their wedding ceremony and reception, and spare rooms were full of guests, so we decided that the best thing was to get them rooms in one of the basic hotels on the ring road. There’s one just over the river from us, so once we knew they were definitely going to arrive I phoned and booked the rooms - four I think - and then booked a pool car for the journey over.

We anticipated cooking them a meal, but we abandoned that idea when we realised that they would arrive late at night, with very young children. Church folk had bought vast quantities of boxed drinks and cartons of coffee as well as bread, ham, cheese, biscuits, cookies, chocolate, fruit… you name it, they had it. I was a little concerned that there wouldn’t be room in their vehicles to take the stuff, but I think it was OK.

Their impressive little convoy entered the car park at about 11:30, so we lost no time bedding everyone down and we scuttled off, explaining that we wouldn’t see them again. They sent us a photo, however, to say thank you to the church folk. 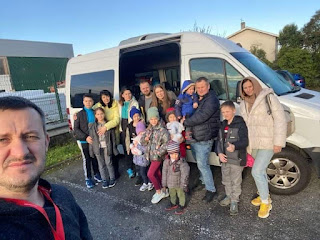 The next morning I got up bright and early to do my Saturday morning talk for our church in North Wales, then broke out my suit, ironed my shirt, printed out my notes, cleaned my shoes, ate a sumptuous lunch, then we assembled our passengers and drove off to Saint Palais de Négrignac in the Charente. The sign is bigger than the village, but the church was beautiful - a lovely, simple 11th century stone freezer. The sun shone brightly and the north wind blew to keep us all alert. The ceremony over, we dropped some people off at the reception hall then drove home. The meal was due to begin at 19h and dessert was scheduled for 23:30, so we decided so skip the reception, come home and be bright eyed and bushy tailed for Sunday.

This may be the last wedding I conduct, so I was glad to look quite the part in the swanky black suit that someone recently gave me - they’ve grown out of it and I’ve shrunk into it - with my outrageously floral shirt bought in the Desigual sale and a plain navy tie to tone it down a bit. My shoes also attended their last wedding. They’re Clarks I bought years ago in the outlet shop in Ellesmere Port, and now the soles have holed. The uppers are all rather strange shapes too, though they still shine up well enough, so I think it’s the end for the road for my fine old comfortable shoes.

Sunday came and we were in Luke 2:1-21 - the glory of Rome and the Glory of the baby in the manger. I was thankful that « powerful people who take themselves for God Almighty » was relatively easy to translate into French. A rather apt description of Caesar Augustus, son of the divine Julius, Pre-eminent, Saviour and Emperor, I thought. We have an excellent interpreter now to save time and effort in doing bilingual preaching, but finding a suitable word for a see-saw eluded all our best French minds, and the only name our excellent interpreter knew for a see-saw is unfortunately quite vulgar. I know one word, balanceoire, but our French folk use that for a swing, other alternatives being trebuchet (my new favourite) and bascule. I won’t give you the vulgar one. You can find it for yourself.

We now have a couple of refugees in the church - not Ukrainians - but sadly one of our number has had his visa renewal refused, so he’s returning home in about two weeks’ time. We’ll miss him terribly but in God’s providence it might not be such a bad idea for him and for his family.