Bordeaux is falling down

well, parts of it.

Some time ago a building collapsed in Marseille. I remember feeling quite sniffy about the fact that a city could let some buildings get into such a poor state of repair that they collapse.

Then last week a building in the St Pierre area of Bordeaux collapsed. But it was an old stone building and was due to be demolished ready for the space to be occupied by something new.

Then on Sunday evening two more buildings collapsed in the St Paul area of the city. We know the street well, just behind one of the shopping streets.

This time one was unoccupied but in the other nine people had to get out as the building fell down around their ears. One man was left seriously injured. Two more were taken to hospital. Others are being cared for otherwise. Some neighbours were blocked in their houses, while others were evacuated. 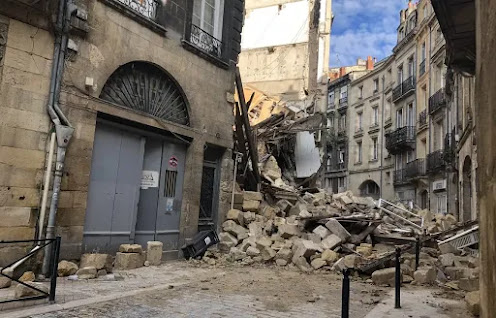 At present it's hard to say why the buildings collapsed. The dry springtime? The recent torrential rains? We hope to know something soon.