Most of my childhood world is found on this satellite photograph 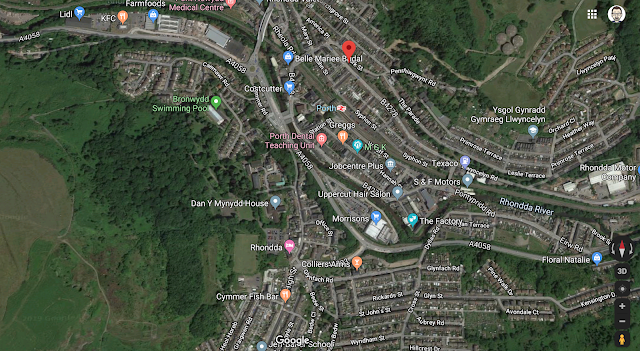 Of course, it's all changed dramatically. The entire road system has been reworked with the loss of Porth Square and the monument (the public toilets in the centre of the square) and the building of the splendid Golden Gate Bridge of Porth. Morrisons has replaced the old Cymmer Colliery, already out of action when I was a child, and my old school has been repurposed several times. But the essential shape of things is still there.

My paternal grandparents lived in a small house built up on the hillside on the left of the photo. If you follow the line that leads left from Morrisons, then at the end of it stood an engine house with a steam engine that pulled trucks of waste rock up the hillside. A little below this engine house stood my grandparents' home. My grandfather's job was to attend to this steam engine.

I don't remember the house at all, it was bulldozed when I was very small, but my cousin has written about it and described the dampness of the downstairs room, the two bedrooms upstairs where seven people slept, the springwater and the plentiful supply of coal, the garden with its vegetables, flowers, rabbits and chickens. There was no electricity or gas. No flush toilets or plumbing. Lighting was by oil lamp. The house was known as Tip Cottage? We were the Daveys, Tip Cottage. Not that there were any other Daveys in the valley.

You couldn't drive up to Tip Cottage. There was a track, but that's all. I suppose you could get a cart up there but otherwise you walked up and down.

Though by my childhood the house had been bulldozed I knew the hillside very well. That line where the rails had been was called the incline. We pronounced it "ink line" and it took me a very long time indeed to connect this sound with a slope. There were streams where we'd hunt for newts, and woods where we'd root around, and heaps of clinker where we'd burrow caves, and cliffs where we'd find caves the rain had burrowed for us, and bracken where we'd play British and Germans and shoot each other and die theatrically. We'd gather whinberries and blackberries and the occasional deadly nightshade and fly kites and run with the dog and run amok. In later years I'd sit on the hillside and watch the world scuttle about below.

My father was living there when he was called up to fight in World War Two in his early twenties. He never talked to me about his wartime experiences. Never. But the photos he took speak of his travels to Egypt and to Palestine. It would be years before he returned to the valley. He came back an experienced driver of heavy vehicles and became a bus driver.

I grew up in one of the first streets as you came down the hill. We moved there when I was about four and I seem to recall going to the house pulling a big old toy circus lorry behind me. When we moved in you had to go into the yard to get to the toilet. One of dad's first projects was to knock together several storerooms to make an indoor toilet and bathroom. The water was heated by the kitchen fireplace and you could really get it hot. We'd feel the tank to see whether there was a good bathful or not.

Later on two reception rooms were knocked into one. The stone-flagged kitchen floor was replaced with concrete, then the wooden living room floor got the same treatment. Central heating replaced the coal fires with first a Parkray coal burner, then a gas fire and backboiler. We had radiators in the kitchen and hallway! By then the kitchen cooking range and belfast sink had given way to fitted kitchen units.

The house had four bedrooms. There was never any heating upstairs, except that one bedroom which had the airing cupboard in it. That room was always too warm.

That's the house where I roasted conkers to make them harder, where my dog slept under the kitchen table, where we'd boil sheep's innards to make her food - the smell was dreadful, where I'd practice the tenor horn in the bathroom to avoid disturbing the neighbours, where my dad grew his chrysanthemums, dahlias, fuchsias and runner beans, where we got ready for my sisters' weddings, my graduation and my parents' funerals. That's the house where my parents lived and died. It's not been bulldozed but I doubt if anyone ever looks at it and remembers that the Daveys used to live there.

I live in a fourth floor apartment near the centre of Bordeaux. It's heated by hot water that comes in dirty great pipes from the recycling plant at Bègles. Not that I've ever noticed the radiators warming up. There's a heat exchanger, too, that gives us instant hot water. We have nuclear energy from the reactor in Blaye and fibre optic internet. We travel everywhere by electric tram or by bus, or we can walk and cycle in the city. We carry our food home from the shops and supermarkets, but otherwise it's hard to imagine how our lives could be more different from those previous generations. And, of course, over 70 years of peace between the nations of Western Europe.

Thanks, it reminds me of a little book I read recently on my way to Brussels: "C'était mieux avant", by Michel Serres, the French philosopher who died recently. Worth a read.