There's a general and public demand that a llama become the new mascot of Bordeaux.

I think it was on Friday night  that five young chaps, little scamps, after an evening that was, as one says here, well-irrigated, spotted a travelling circus up high on the right bank of the city.

After suffering rejection from a zebra, they found a friendly llama who acquiesced in participating in their evening of somewhat unstable frolics. There followed group photographs of the lads and the llama where all seem to be having an super time. Then they stumbled, or staggered, upon the tram. 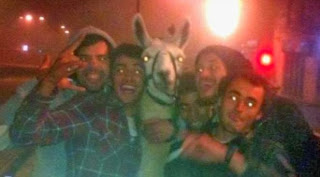 The trams in Bordeaux are not like the ones at Blackpool, they are very high-tech. They are all under video-surveillance. The driver can see all points in his tram without even leaving his seat.

He observed the group of six lads. All were hairy. One unnaturally so. This individual was also unusually tall and had elongated features.

So he stopped the tram and called the police. The police, with great discrimination, no pun intended, locked the lads in the cells and tied up the llama at the tram stop till the owner could be found and summoned for a joyful reunion.

One of the lads is a waiter in a restaurant, so he phoned his boss to say he'd probably be late for work.

The restaurant owner, a hero in this story, phoned the circus owner to explain what had happened and invite him for a meal at his restaurant.

He came, he ate, waited upon by the lad concerned. It transpired that Serge, another hero in the story, had behaved himself impeccably and done no damage at all of any kind during his wanderings. The circus owner withdrew the complaint he had made to the police and one hopes that all are going on to live happily ever after.

NOTE WELL : would that all tales of student drunkenness ended so positively. Several Bordeaux students last year left nightclubs sozzled and fell in the river to their death. The circus owner himself says that had the lads taken the zebra the evening would have finished badly.

Oh yes, and Serge the Llama is going to the restaurant on Monday evening.  The restaurant owner has the last word (attention - very free translation) :

It's a funny, surprising story. Everyone can identify with these youngsters. Boys will be boys! It's better than those who have accidents because of drunk-driving, or get into fights or insult the police.